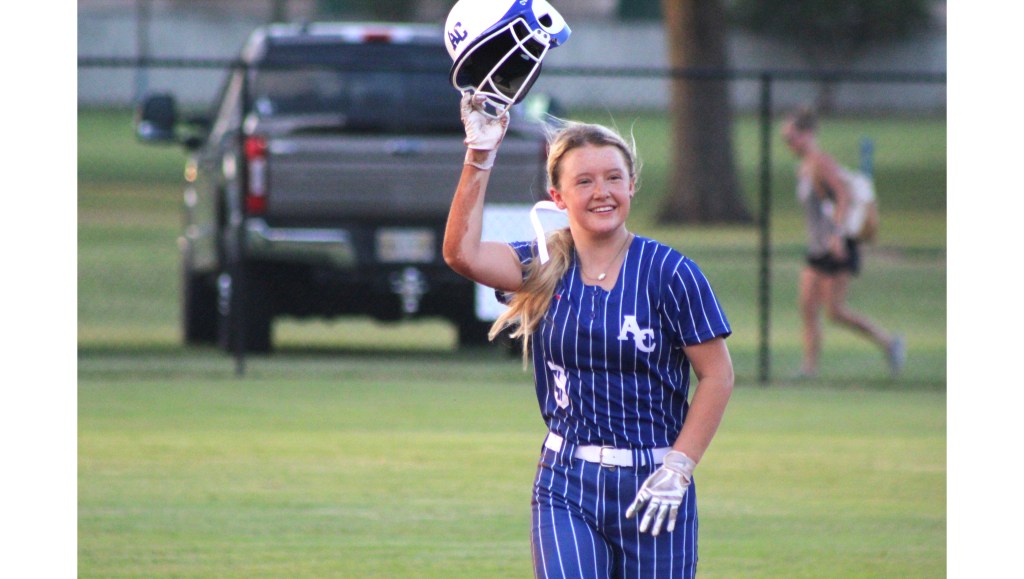 VICKSBURG – Paris Harveston’s run-scoring single ignited a three-run rally in the top of the fifth inning as the Adams County Christian School Lady Rebels held on for a 6-4 win over the St. Aloysius Lady Flashes last Tuesday night.

The win was the second of the season and the first for ACCS since a 5-4 come-from-behind win over Oak Forest Academy on Saturday, Aug. 14 at the Amite School Center Tournament. The Lady Rebels improved to 2-10 overall and 1-3 in MAIS District 3-5A.

“We won. We played together as a team. It’s a good positive and a good way to turn our season around,” Lady Rebels head coach Tate Lipscomb said. “This win was a good way for us to move forward. Hopefully it will build confidence in the girls.”

What was perhaps most rewarding about this win was that the Lady Rebels held a district opponent to single-digit scoring. They gave up 11 runs at home to cross-town rival Cathedral High School on Aug. 16, 10 runs on the road at Central Hinds Academy on Aug. 17, and was shut out by Copiah Academy 12-0 at home last Monday night.

Laiken Davis had a solid outing in the circle for the Lady Rebels. He pitched a complete game and allowed four runs, only one of them earned, on five hits with eight strikeouts and four walks.

“She did very well. She got the ground balls, the fly ball outs when we needed them to stay in the game,” Lipscomb said.

The first of two doubles by Kate Parsons scored a run and helped ACCS jump out to a 2-0 lead in the top of the first inning. St. Aloysius scored two runs in the bottom of the first inning, one of them on one of four errors committed by the Lady Rebels, to tie the game at 2-2.

Despite giving up nine hits, St. Al’s pitcher struck out 13 batters in a complete-game outing for the Lady Flashes. She allowed six runs, but only two of them were earned, walked just one batter.

“Some the girls struggled against her. She hit her spots. Her speed was slower than what we’re used to seeing,” Lipscomb said. “Some the girls made the adjustments and got a couple of hits and scored some runs for us. Some of the girls had trouble making adjustments from Monday night to Tuesday night.”

Alli Lindsey and Addison Massey each went 1-for-3 and Davis helped her own cause by going 1-for-4 with two RBIs. Brooke Collier was 1-for-4 with one run scored and Georgia Martin was 1-for-4. Kessley Maples and Emma Massey each scored a run for the Lady Rebels.

“Paris had a big hit that drove in two runs. Laiken hit the ball and they bobbled it and she beat it out and that scored Paris,” Lipscomb. “Parsons had a big double that drove in a run (in the first inning.”