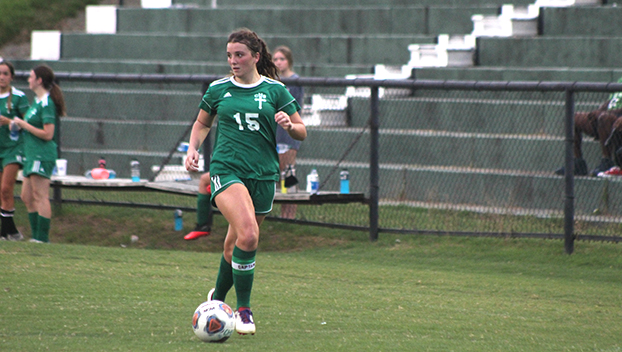 They were out Tuesday due to possible COVID exposure, but if they test negative on Wednesday, they can rejoin the team for Thursday’s game against Laurel, he said. Cathedral needed their senior experience to create attacking opportunities in the game, he said.

“Jacie is tenacious and a disruptor. It is unreal how much she disrupts the opponent’s attack,” Hogue said. “Izzy can finish up top, so you feel that. It makes a huge difference. Maddie Verruchi had a collision (early in the second half) and was not quite feeling herself after that. She is a machine all in herself.”

Trailing 3-1 at the half, Cathedral had an opportunity to come back when they scored a couple of minutes after the second half started, he said.

“We put the ball in the back of the net. Then they come down the field and suck the wind out of our sails,” Hogue said. “For a fleeting moment, I thought we were back in the game.”

Laurel Christian is a solid team and won the state championship last season, he said. After the game, he told his team he was proud of their effort while missing key players.

Some of the Green Wave players had to play more minutes than usual, he said. Missing players impacts the depth he has on the bench. He turned to the junior varsity team for help.

“I was super impressed with our girls because they battled on,” Hogue said. “I pulled Lizzie Verruchi up from JV, and she played nearly a half. She held a clinic on defensive play and made it difficult for Laurel Christian’s attack.”

Natalie Smith and Samantha Ashley made an impact in the game. He said he is impressed with how they have improved as players.

“Samantha has good speed and a good left foot. Natalie has speed and touch,” Hogue said. “Their game is starting to develop, and they are taking it to the next level.”