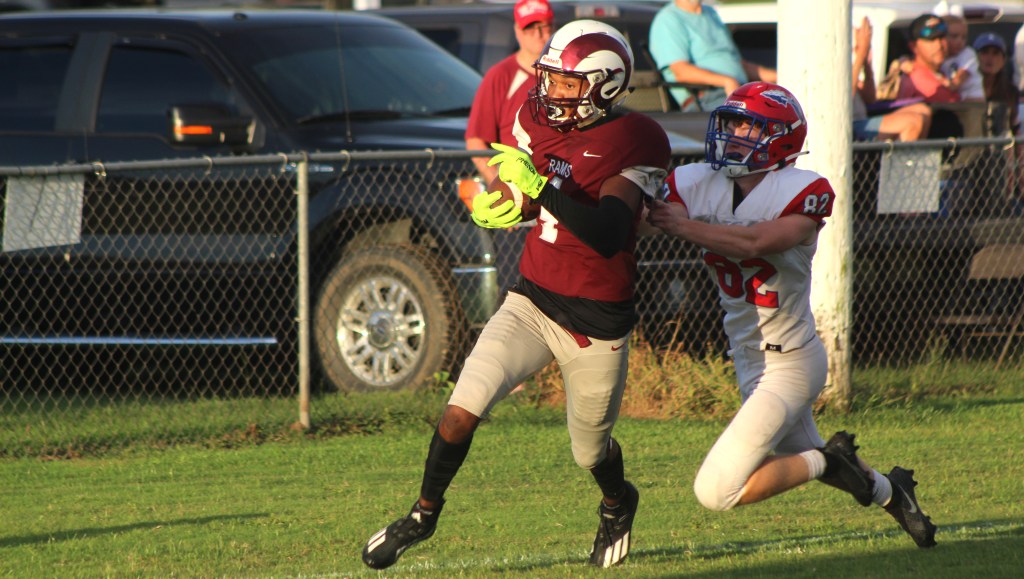 Roderick "Slim" Bailey was the offensive spark in WCCA's win over Tensas Academy Friday night. He set the tone with a huge rush to open the game and finished with 237 total yards. (Hunter Cloud | The Natchez Democrat)

Woodville  — Wilkinson County Christian Academy’s Roderick “Slim” Bailey opened the game with a 70 yard run down the right-hand side and came four yards short of the end zone.

He carried the ball four yards for a touchdown the next play and set the tone in WCCA’s 46-6 win against Tensas Academy.

Bailey had 12 carries for 177 yards and two touchdowns. He returned a punt for 52 yards and a touchdown score in the third quarter. Receiving, he had one catch for eight yards, and on defense, he had three tackles, a forced fumble and a fumble recovery.

As a team, WCCA had 330 yards rushing and 21 yards passing for 351 total yards. The Rams held Tensas Parish to 185 yards of total offense. Head coach Randy Holloway said halftime was the turning point of the game. WCCA held a 12 point lead at the half before scoring 28 unanswered points in the second half.

“Our experience was the turning point in the game,” Holloway said. “We went in at halftime and got after them in the second half. We started executing on offense and tackling on defense.”

Since 9th grade, Bailey has attended school at WCCA. His football career began when he was young, he said. Working hard gives his teammates something to aspire to be.

“I want to try to be the best and motivate the team to be the best too,” Bailey said. “I just love to play the sport. It’s good to come out here and have fun with the coaches and players.”

Defensively, Nathan Mudd stepped up with 10 tackles and a blocked punt. Holloway said he reminds him of Ted Hendricks, a defensive end for the Oakland Raiders. He was known as the Stork for his lanky figure. Mudd is lanky and quick like Hendricks, Holloway said.

Additionally, Mudd is always in the correct position, he said. On a fourth down in the fourth quarter, Mudd rushed off the edge and blocked a punt.

“When it left his foot, I knocked it down. It was a rush of excitement,” Mudd said. “A lot is going through your mind. You think, ‘Did that just really happen.’ Teammates and coaches are congratulating you. Being lanky is an advantage because I have a speed advantage. I can squeeze through people.”