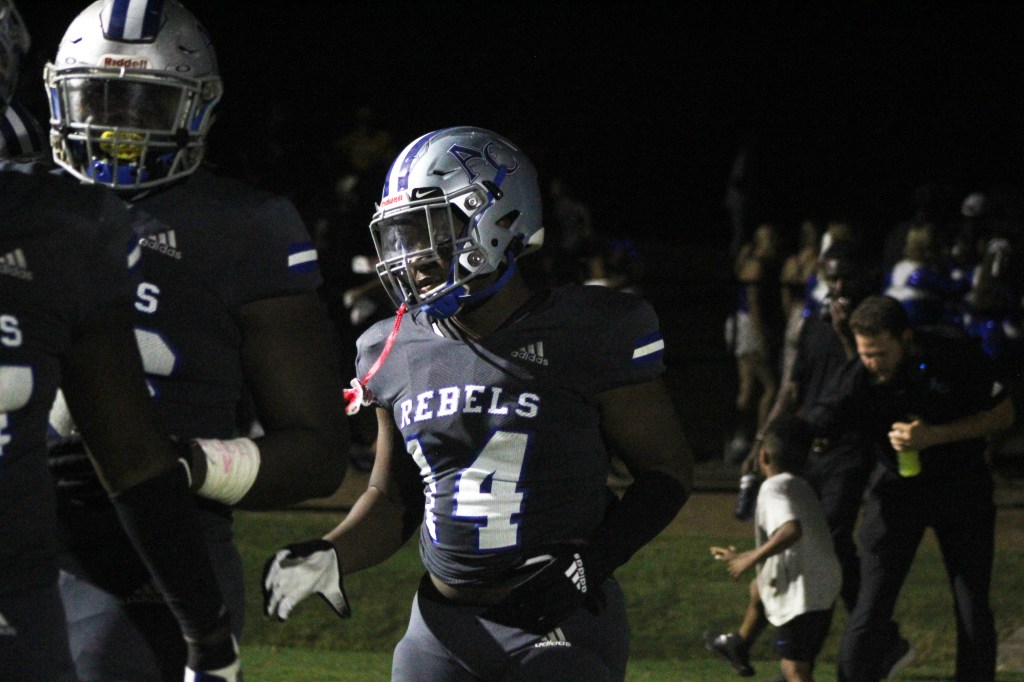 ACCS running back J.J. Clairborne had the Rebel's only touchdown with a four-yard rush against Oak Forest. (File Photo | The Natchez Democrat)

White led Oak Forest (2-0) with 116 yards on eight carries. Hendry had 112 yards and three touchdowns on 11 carries. Wolfe had five carries for 106, including a 68-yard touchdown run to go with a 29-yard fumble recovery for a touchdown to help the Yellow Jackets take a 21-0 halftime lead.

“We had some untimely moments in the game that allowed them to keep the momentum going,” ACCS head coach David King said. “We showed our inexperience during some drives. That’s a good ball team. They’re a good team.”

Hendry scored on a three-yard run with 4:09 to go in the first quarter to give Oak Forest a 7-0 lead.

The Rebels finally got a spark offensively when the drove the field 80 yards, capped off by a four-yard touchdown run by J.J. Claiborne with 5:19 to go in the third quarter. But the extra point was blocked and the Yellow Jackets led 21-6.

Unfortunately, any momentum ACCS had ended quickly when Hendry broke a few tackles and ran 45 yards for a touchdown just a minute and a half later for a 28-7 Yellow Jackets lead. Hendry finished off the scoring with a 19-yard run with 5:56 left in the game.

“They kind of wore us down. They have more depth than we do and it showed,” King said. “I knew they would be a tough opponent. We still could’ve kept it closer. We made too many mistakes and missed too many opportunities, but they had a lot to do with that”

Claiborne finished with 41 yards on 12 carries. Coleman Carter completed 11 of 22 passes for 74 yards with one interception to go with 42 rushing yards on 13 carries.

Jamar Kaho led the Rebels’ ground game with 53 yards on just two carries and was the team’s leading receiver with 42 yards on four receptions. Tiki Griffen had two catches for 20 yards while Jordan Berry had three catches for 17 yards.

ACCS (1-1) plays host to Clinton Christian Academy in the MAIS District 3-5A opener Friday at 7 p.m. It will also be the Military Appreciation Game.