The Dart: Natchez native retires to his hometown 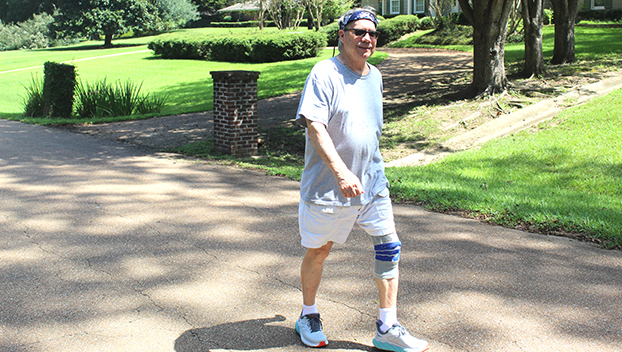 Natchez native Sammy Gore walks down Woodhaven Drive close to where The Dart landed Friday. He spent 43 years in the healthcare industry, 17 of those were spent in Dallas. He retired in January of this year and moved back home. (Hunter Cloud The Natchez Democrat)

NATCHEZ — Natchez native Sammy Gore walked down Woodhaven Drive close to where the dart landed Friday morning. He was born and raised in Natchez, and so was his wife Carla Gore.

Seventeen years ago, they moved to Dallas, where Sammy worked as a regional manager for a nursing home company called Southwest LTC. Carla was involved in the oil and gas business. They lived on Lake Livingston, he said.

In March 2020, he wanted to retire after 43 years in the healthcare industry, but COVID made him rethink his decision. He put off retirement until January 1, 2021.

As an industry, healthcare has a lot of pressure, he said. Retirement took a lot of weight of his shoulders. Healthcare is a rewarding and tough business, he said.

“Good health care workers are hard to come by,” Gore said. “The CNAs and nurses work harder than any industry I have seen in my lifetime. They are doing the hands-on care.”

Currently, they are still in the process of moving. He said they are living out of boxes and once they can settle in, he plans to return to his old hobbies of hunting, fishing and walking. The couple plans to travel, he said.

When he was 50, he ran a marathon. He used to be a jogger, but his knees have given him issues so he is unable to run or play tennis. Walking is one of the ways he can stay active.

“I enjoy walking because it puts you outside in nature, as does hunting and fishing,” Gore said. “I love being out in God’s nature. It is beautiful. With the world as corrupt as it is, it is wonderful to get out and walk. The spirituality captures my attention. I enjoy walking with others and walking by myself.”