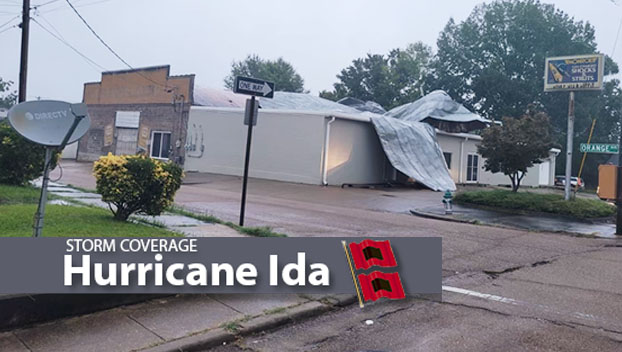 NATCHEZ — Adams County and Concordia Parish seem to have missed the worst of Hurricane Ida. However, for the few who have suffered damages to their homes or businesses during the storm, now is the time to report those damages.

Fallen trees damaged houses on Tate Road and Cherry Street and strong winds damaged the roof of a building on Orange Avenue. No injuries have been reported.

While most seemed to have fared well during the storm, 52 local residents did take shelter at the Adams County Safe Room Sunday night, she said.

As they are reporting to insurance agents, Adams County residents who’ve suffered storm damage should also report property damage online www.adamscountyms.ms.net, by scrolling down to the “report damages” link in order for the county to be considered for emergency aid from MEMA and FEMA.

There, they can also upload pictures and give descriptions of the damage, Hardy said. However, a claim must still be filed with insurance, she said. Damages that should be reported includes any damage to structures such as homes or businesses by debris or fallen trees, wind or flood.

Damaged fences or vehicles are not eligible for state or federal aid, Hardy said.

“We’ve had multiple trees down on county roads. We’ve been out since 3 a.m. clearing roads,” Patten said. “We’ve had some transformers in the ground and poles snapped. People are free to move about. We appreciate people cooperating with the curfew, which allows electrical and county crews to get power restored. There are still a lot of people without power but it has helped a lot. In this case, a little cooperation mixed with prayer has gone a long way.”

A tree limb caused minimal damage to an older patrol car at an officers house, however the car is still drivable, Daughtry said.

“We want to thank the citizens for adhering to our curfew. It really made our job a lot easier not having to respond to any accidents in this storm. We should be in the clear.”

Natchez Fire Chief Robert Arrington also reminded residents who are cleaning up to stay clear of power lines and not to run generators in enclosed areas. Put them outside.

Residents of Vidalia and Concordia Parish also fared well during the hurricane.

Apart from a few minor power outages, Vidalia Police Chief Joey Merrill and Timothy Vanier, the director of the Office of Homeland Security and Emergency Preparations for Concordia Parish, said no accidents, damages or storm-related injuries have been reported.

“We missed the brunt of it when it went further east,” Merrill said. “Other than a few minor power outages, we’ve had no major incidents.”

Vanier also said there had been “very little debris, no flash flooding and a couple of very minor power outages,” most of which should be restored by the end of the day Monday.

“All of our residents are pretty blessed,” he said.

In addition to reporting storm damage to insurance agents, Louisiana residents should also report damages to damages.la.gov for the parish to possibly receive aid, Vanier said.