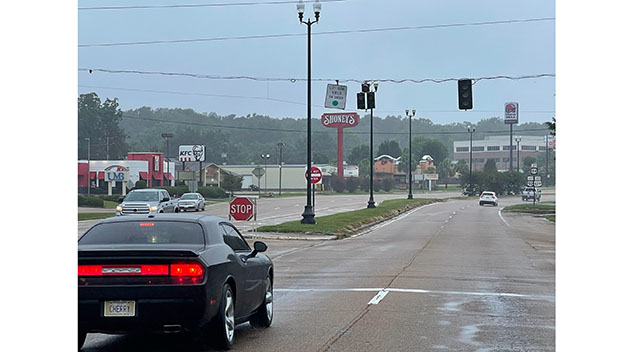 Traffic signals at Seargent Prentiss and Highland Boulevard did not have power Monday.

NATCHEZ — Sunday morning, Natchez and Adams County seemed to have missed a great deal of the damage that was expected from Hurricane Ida, which skirted just to the east of the area.

However, many were still without power Tuesday morning as linemen are still working to repair the damage. Upwards of 4,000 Entergy customers and 3,200 Southwest Electric Cooperative members in Natchez and Adams County are without power on Sunday as strong winds took down trees and power lines.

“When all of this started, we had 58 percent of meters out in Adams County,” she said.

Southwest currently has five crews out working to restore power to the area, including some who are not with Southwest but are assisting, McGee said.

“We anticipate getting everyone restored by Friday,” she said. “Certain areas of Adams that we’re working on right now are Lower Woodville, Kingston, Dunbarton and Broadmoore. Those areas should be restored Tuesday and Wednesday and remaining areas restored Thursday and as late as Friday.”

Entergy spokesman Tim Runnels said most of those customers should be back on by the end of the day Tuesday with maybe a few carried over into Wednesday.

After that, Entergy crews would turn their resources further south to the Gloster, Woodville and Meadville areas where the damage was more severe, he said.