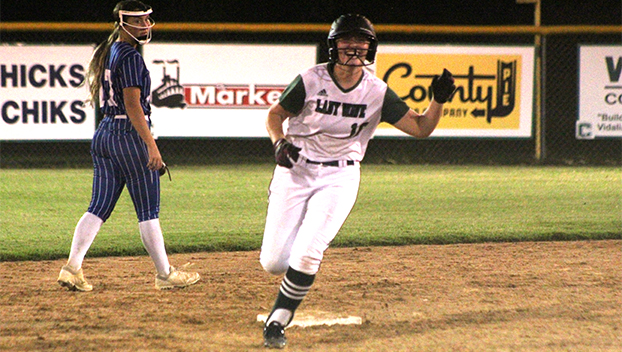 NATCHEZ — Cate Drane’s first career home run could not have come at a better time. In a game against crosstown rival ACCS, the senior blasted a line drive over the left-center field wall to give the Wave a 6-1 lead in the bottom of the sixth Tuesday night.

Cathedral hung on to win 9-1 after scoring four additional runs in the inning. Head coach Craig Beesley said he was so proud of her. She had not hit a home run in practice either, he said.

Instead, Harrigill struck out, which opened the door for Drane to swing for the fences. Teammates told her to keep hitting the ball as she approached the plate.

Standing in the batter’s box, she wanted to do one thing. Put her team up by more runs, she said. A Rebel player said after their first game against Cathedral there would be a comeback. Drane said she wanted to make sure that was not possible.

“I almost started crying when I saw it go over,” Drane said. ” It’s at home, we are first in the district, and I know it made my team go up by more runs against AC. It is my first home run. I started playing in sixth grade. I never hit an outside-the-park home run. It was the perfect situation.”

Rounding second, she fist-pumped the air. When she got around third, she gave Beesley a high five. At home plate, she was swarmed by cheering teammates.

“I had never been able to do that,” Drane said. “I get around third, and everyone is at home. I got emotional. It was an experience unlike any other.”

When Drane reached the dugout, her mom Cindy Drane was there to greet her. She told her mom she was mad when she hit it.

A fan missed the special moment. Her father Dr. Kenneth Drane works as a physician in Shreveport, Louisiana. He is out of town from Sunday to Tuesday night.

Hurricane Ida complicated the night as it caused her dad to take her car, which had all of her softball gear. She had to borrow cleats, a glove, a batting helmet and a bat for the game. Her dad would have gotten in Tuesday night by 8, which was too late for the game.

“It is unfortunate, but he is doing his job for our family,” Cate said. “I could not be here without him. It is sweet and sour. I would not be playing on this field if he did not do what he does for our family.”

Her older sister Lilly Drane was also absent from the game. Typically, she would be in attendance, but she just moved into college a couple of weeks ago, Cate said.

“It is me, and my mom right now,” Cate said. “It was on camera too so I can show my dad. I am grateful for whoever comes and sees me play.”

Adams County Christian School stranded 10 base runners in the game and got one hit. They play Riverfield in a doubleheader on Thursday.