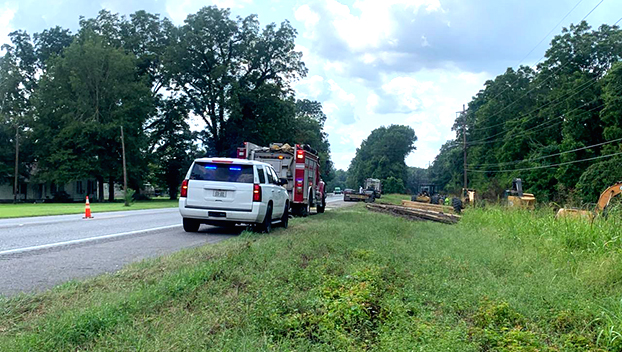 Responders with the Concordia Parish Volunteer Fire Department and the Louisiana State Police assist loggers at the scene of a gas line rupture Wednesday. Traffic is asked to slow down on US84 in Ferriday going towards Jonesville. (Hunter Cloud | The Natchez Demcorat)

FERRIDAY — A leak in a major gas line that ruptured close to U.S. 84 between Ferriday and Jonesville was under control by 3 p.m. Wednesday, Concordia Parish Sheriff David Hedrick said.

Workers were able to place a valve on the pipe and traffic should now be flowing as normal, he said.

“A construction crew accidentally ruptured a major gas line close to the highway. It could be extremely dangerous to drive through that area,” the post states.

Concordia Parish deputies and a Louisiana state trooper were dispatched to the area at 10:30 a.m.

“All the caller told us was the loggers were out there and compromised the big pipeline in that area,” a CPSO dispatcher said. “We called Jonesville utilities and they notified the gas company.”