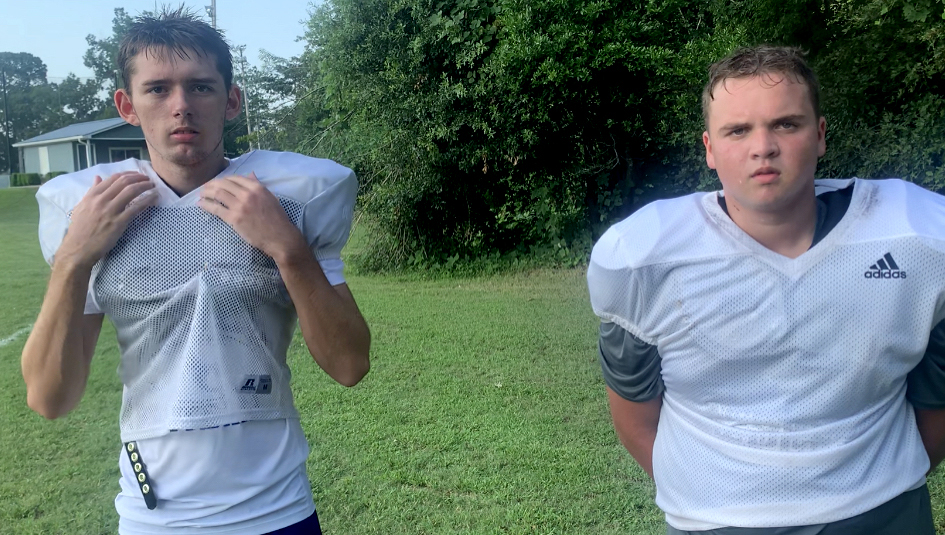 ACCS football players Chandler Collier, at left, and Donavan Ryan are playing with pride in the Rebel's Military Appreciation game against Clinton Christian. Collier's aunt Tiffany Collier served in the Marines and Ryan's stepdad is actively serving with the Army and is deployed overseas. (Hunter Cloud | The Natchez Democrat)

Collier’s aunt, Tiffany Collier, served in the Marines with communications for pilots, he said. It was a job she took a lot of pride in, he said. Friday night, he said he wants to show that same pride.

“It feels good to know we have people in our lives who are willing to sacrifice so we can enjoy our lives, our freedoms and our rights without worry,” Collier said. “It is really humbling…It is very inspiring. She had to step up and make sure everyone was safe. Something about it is just inspiring to me.”

He said he tries to take a leadership role on the field because of his aunt and be a team player. Collier does this by keeping his teammates’ spirits up and giving his best, he said.

Ryan’s stepdad, John Dale Loomis, is in the army. He said his stepdad is deployed overseas but could not say where. His stepdad should return home in a couple of months, he said.

His stepdad taught him a lot of things like how to be a man, he said.

“I’m going to use that on the field for Friday. I’m going to show my pride in the army,” Ryan said. “It is very special because I get to go out there and play for him and whoever fought for us in the country for our freedom.”

The kickoff for the game is at 7 p.m.