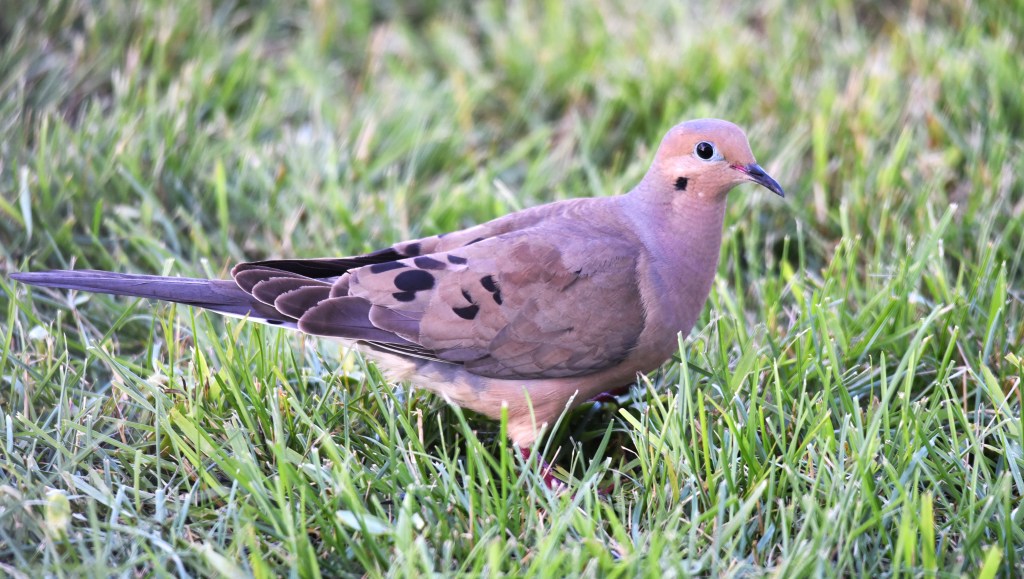 Mourning doves and other dove species feed on seeds from grasses and other vegetation on the ground. (Courtesy Photo Courtney Celley | United States Fish and Wildlife Services)

JACKSON — Mississippi and Louisiana’s dove season opens Sept. 4, a half-hour before sunrise. Hunters in Mississippi target white-winged and mourning doves with a daily bag limit of 15 singly or aggregate.

Louisiana hunters can target white-winged, mourning, Eurasian collared and ringed turtle doves with a daily bag limit of 15 doves in aggregate. Hunters in both states are limited to possessing 45 doves.

Houston Havens, Dove Biologist for the Mississippi Department of Wildlife, Fisheries and Parks, said the best way for new hunters to identify doves is to go with an experienced hunter. An inexperienced hunter can learn the difference between a dove and a non-target bird species. Another way hunters can identify doves in the field is by their tendencies in flight, he said.

“Doves are relatively ‘graceful’ fliers generally keeping straight lines in the direction they are headed,” Havens said. “They do not do a lot of erratic changing in elevations. Doves also have a fairly distinctive whistle to their wing beats that can alert hunters to their approach.”

A dove’s coo can reveal their location when they are on the roost early in the morning. Hunters do not use cooing as a hunting tool, he said. A dove call would not bring birds to a hunter’s location, he said.

Wind does not typically affect the direction a dove will fly, he said. It does have an impact on how fast a dove can fly.

“A dove passing overhead with a tailwind can be a challenge for even the most experienced wing-shooter,” Havens said.

Doves roost in trees and shrubs, but all of their feeding activity is on the ground, he said. Seeds from grasses and other vegetation are their primary food source.

Hunters do not have to hunt doves over a food source. The birds use a flight pattern over natural features such as a tree line or a fence row to get to those food sources from roosting sites. Water sources are another hunting location, he said.

“Hunting a water source with clean, open ground around the edges can also be a productive strategy,” Havens said. “Doves will land at the water’s edge and walk down to drink after feeding.”

Habitat management for doves is more than providing a food or water source for the bird, he said. Hunters could provide quality roosting sites or resting sites near hunting areas. A resting or roosting site can be created with dead trees or limbs with plenty of open space for doves to perch. Doves often alternate between feeding, drinking and resting, he said.

“Usually, it takes about four birds per person to make a meal,” Havens said. “In addition to the breast meat, some hunters cook and eat the hearts and gizzards from doves.”