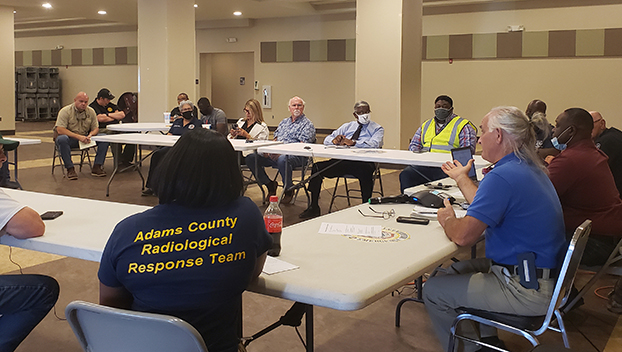 Officials and first responders gather in the Adams County Safe Room Friday for a weather briefing and emergency planning for Hurricane Ida. The group returned to the Safe Room Wednesday to assess how emergency response efforts went.(Sabrina Robertson | The Natchez Democrat)

NATCHEZ — Emergency Management Officials and partners who all played a vital role in the community response to Hurricane Ida gathered at the Safe Room on Liberty Road Wednesday to discuss how it went.

Bradford said while Adams County “dodged the bullet” when the Ida’s eye shifted further east of the area, he said the storm still provided a learning opportunity for all involved in responding to what could have been a major disaster.

The purpose of Wednesday’s meeting, he said, was to discuss what went well and what could be done better. Officials said the emergency command center did well with sending out information to the public through media outlets and with CODERED phone alert system, which the public can sign up for at adamscountyms.net.

On the home page, there is a button to click on that takes you to the CODERED sign up page. Users will be prompted to create a username and password for managing notification settings.

One lesson learned during this storm was who should be involved in the emergency planning process, officials said.

Visit Natchez Executive Director Devin Heath and Natchez National Historical Park Superintendent Kathleen Bond were not at the table during emergency planning meetings until Wednesday when Bond said they could have been.

As hotels and RV parks started filling up with hurricane evacuees, Visit Natchez and the park service both were the gate keepers who provided invaluable information regarding what places were open and had rooms available.

In the next severe weather event, Heath said Visit Natchez could have a flag posted on their website, visitnatchez.org, which people could click on for a list of places they can seek shelter.

Others who were not at the table and could have been are area grocery store and fuel company managers, particularly when local government discusses a storm curfew, who should stay open and who should close up early to send employees home safely, Bradford said.

Initially, the temporary hurricane shelter at the Safe Room had no food plans for dozens of people who came there, but thanks a last-stitch effort from the Natchez Stewpot they were fed two meals, lunch and supper. In the future, churches with generators could be tapped to prepare meals for the shelter in the event of a widespread power outage.

In the end, it’s up to the responding agencies and community to decide what to do when a disaster hits, but having a plan helps, Bradford said.

“The Emergency Management Agency is not here to control but help agencies manage and coordinate their resources in a natural disaster,” he said.