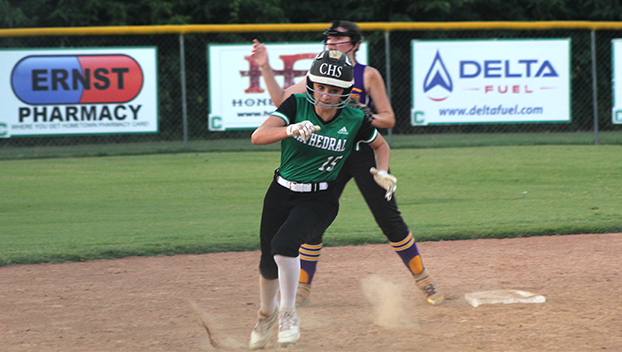 KG Fisher rounds second and heads to third base in the bottom of the second inning. She drove in two RBIs on the play and sparked a five run inning as Cathedral beat St. Aloysius 12-3 Thursday night. (Hunter Cloud | The Natchez Democrat)

NATCHEZ — Cathedral was down 3-2 to St. Aloysius in the bottom of the second inning until KG Fisher stepped up to the plate and delivered a triple down the third baseline. She drove in Katlin Nettles and Cate Drane to give the Green Wave a 4-3 lead.

Three more runs crossed the plate that inning as Cathedral went on to win 12 -3 over St Aloysius. Head coach Craig Beesley said the ninth graders on his team played well this year and at times stood out.

Fisher is one of those freshmen who stood out. She had two hits and two RBIs. Her triple in the bottom of the second gave a spark to the offense on senior night.

“I was just trying to get the energy up,” Fisher said. “I got a triple, which was great. (On triples) I don’t get tired because I have a lot of adrenaline. Kinsley (Young) came up behind me and got the inning started by scoring two more runs.”

As a freshman, she bats leadoff for the Green Wave. She said she likes batting first and does not feel any pressure.

Her job is easy, she said. As leadoff, she has to get the inning started and get on base. She said if she batted clean up, she would need to hit for power. Offensively, she had a good night at the plate, she said.

“Two games ago, I wasn’t hitting good,” Fisher said. “My dad (Bryan Fisher) and I went to the cage and worked on it. I’ve been getting the batting average up since.”

He said seniors Dunbar, Drane, Hannah Murray, Harrigill, Katelon Nettles and JaJa Jordan got to play. Their senior leadership is needed over the next few weeks as they wrap up district play.

As a team, Cathedral has to do better in their approaches at the plate, he said. The Green Wave’s final three innings could have been better, he said.