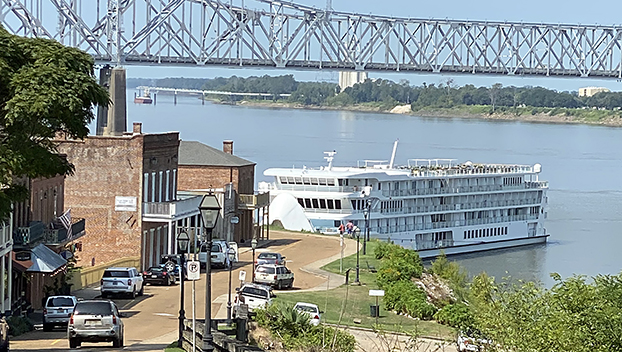 The Melody, the newest ship in American Cruise Lines’ lineup, on its maiden voyage was diverted because of Hurricane Ida. That has meant an extended stay for passengers in Natchez. It plans to depart for Baton Rouge on Friday morning. (Photo courtesy Gail Guido)

NATCHEZ — Thanks to Hurricane Ida, passengers aboard The Melody, the newest ship in the American Cruise Lines arsenal, got an extended stay in Natchez on what is the ship’s maiden voyage.

The ship departed New Orleans on Friday and made its way up the river. It was originally scheduled to arrive in Natchez on Sunday night. However, because of the storm, it did not arrive here until Tuesday. It has been in Natchez since that time.

Plans now are for it to take off on Friday morning, headed to Baton Rouge, where passengers will depart. Because of the damage to the electrical grid, New Orleans is still mostly shut down.

“It’s actually been a blessing in disguise,” said Natchez Mayor Dan Gibson. “(American Cruise Lines) chose a really good spot where they knew their passengers would have a good time.”

Frank Klipsch, director of city partnerships and special projects for American Cruise Lines, said passengers have been enjoying extra venues, thanks to Visit Natchez and others here.

“If we are going to be anyplace for an extended stay, we want it to be in Natchez,” Klipsch said. “Natchez has done a phenomenal job of providing additional venues and things for our passengers to do while they have been here.”

“The passengers have been touring houses, been eating and shopping in our shops,” Gibson said. He plans on having dinner on The Melody tonight.

“I plan to provide a musical performance on the boat tonight. And Burnley Cook will be there at 5:45 p.m. and perform under the hill,” Gibson said.

Gail Guido, who owns Silver Street Gifts located Under the Hill, said most of the passengers are in great spirits.

“The majority of them are real troopers and are enjoying Natchez,” she said. “I’ve given them maps and once they got a map of the city in their hands, they were so thrilled and have taken off adventuring.”