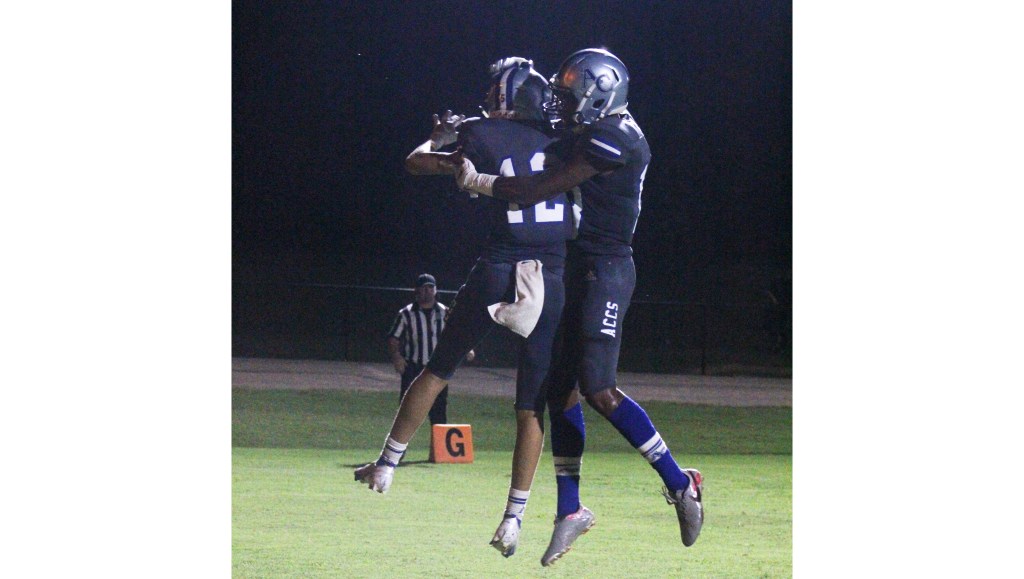 NATCHEZ — Adams County Christian School opened up their military appreciation game with a 33-yard rush by JJ Clairborne just 26 seconds into the game and never looked back. The Rebels gained 422 total yards in their 54-18 win over Clinton Christian Academy on Military Appreciation Night.

With less than a minute left in the first quarter, Coleman Carter rolled out to his left and found his good friend Samuel Merriett wide open in the back of the endzone for a 17-yard touchdown pass. The score extended the Rebels lead to 35-6 at the end of the first quarter.

“I just saw my buddy was in trouble, and I thought I would help him out,” Merriett said. “He is my best friend from church. We have known each other for a long time. It makes it so much more fun to catch a pass from a friend. It feels great catching a touchdown pass from a guy I have known for a while, rather than if I had caught one from a stranger.”

Carter had the same scenario play out in the second quarter when he completed a 17-yard pass to Colin Cauthen to give the Rebels a 42-6 lead. Clinton Christian answered as Loftin drove the field and delivered an 8-yard TD pass to Jakevion Jones.

Tiqi Griffin muffed the initial kickoff but used his speed on the return to get to the outside. At midfield, he had an empty field in front of him as he raced 85-yards to the end zone giving AC a 48-12 lead. ACCS took a knee instead of going for two or kicking the extra point.

The Warriors answered with a 61 yard rush by Carter Wilson to make it 48-18. Rebels senior Conor Aplin responded with a long rushing touchdown of his own. He raced 56 yards to score the last touchdown of the game as AC won 54-18.

Carter was perfect through the air as he completed 12 out of 12 passes for 189 yards and 3 touchdowns. He had 4 rushes for 40 yards and a rushing touchdown. In total, he had 229 yards and four touchdowns.

“It’s just the adrenaline, and the fans are cheering,” Merriett said. “It gets you pumped up.”