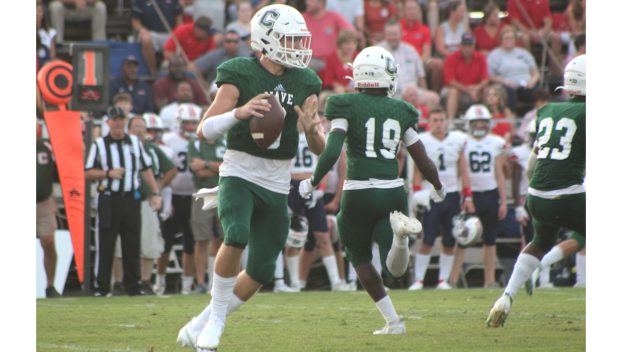 “We were able to do our job more consistently up front,” Darbonne said. “We were efficient throwing the ball. We were clicking on all cylinders for a while.”

Darbonne said that his offense could have put up even more points on the scoreboard had it not been for penalties and mental breakdowns.

“We had a lot of penalties that kept up from putting more points up. We left a lot of opportunities out there. We had some mental breakdowns that cost us,” Darbonne said. “We still had some turnovers.”

After trailing 6-0 early in the first quarter, Cathedral scored 21 consecutive points. Russ connected with Harper Jones with 2:16 left and Paxton Junkin’s extra point gave the Green Wave their first lead of the 2021 season at 7-6.

In the final minute of the opening quarter, Russ threw two touchdown passes to Christian Wright, the first one after a successful onside kick, to give Cathedral a 21-6 lead.

The Crusaders scored a touchdown and two-point conversion to make it a 21-14 game with 7:41 left in the second quarter, but Batieste’s first TD run of the game from 10 yards out with 4:36 left gave the Green Wave a 27-14 lead that it would take into halftime.

Batieste scored on another short touchdown run, this time at the 9:01 mark of the third quarter for a 33-14 Cathedral advantage. Russ then threw a 24-yard TD pass to Wright with 6:21 left in the third and later hooked up with Jones on a 34-yard scoring pass with 1:36 remaining in the same quarter to complete the scoring.

Darbonne said the defense came up with big stops when it had to and that the secondary had a good showing. He was not pleased with its run defense.

“Got a lot of work to do on our run defense. We gave up somewhere between 150 and 180 rushing yards. We gave up too many rushing first downs,” Darbonne said. “Overall, I was proud of the way they played.”