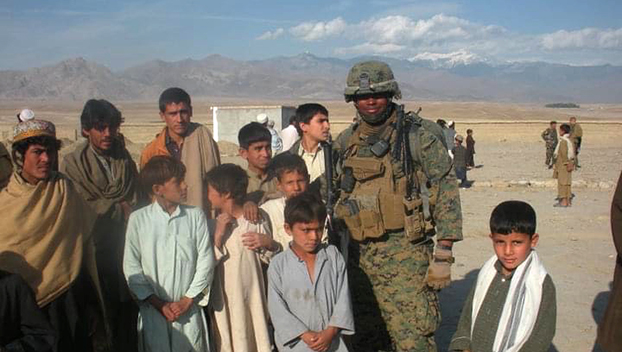 Concordia Parish deputy Walter Mackel with Afgan teenagers while on tour. He was deployed to Afghanistan from July 2009 to April 2010. (Submitted Photo)

NATCHEZ — As the United States closes a chapter in the 20-year war in Afghanistan, one local veteran left part of his life in the Middle-Eastern country.

Walter Mackel, a deputy sheriff in Concordia Parish, was deployed there from July 2009 to April 2010 as part of an Embedded Training Team in the U.S. Marine Corps.

“Our mission was to train and advise the ANA (Afghan National Army) in the areas of intelligence, communications fire support logistics infantry tactics and medical,” Mackel said. “In our area there were six teams of 21 Marines and three Corpsman to each province split into three to four smaller units. We ate slept and fought alongside the ANA Troops. We ran missions as well as QRF (Quick Reaction Force) 24/7 with our counterparts.”

Mackel said he became very familiar with the Afghan soldiers.

“Most of our ANA soldiers were good fighters who wanted the betterment of their country,” he said. “We achieved so much in the short time we were deployed there. This was around the time Afghan women could vote for the very first time. It was very exhilarating to see these women exercise their right to vote.”

Yet, trouble always seemed to be brewing, Mackel said.

“The next day (after Afghan women were allowed to vote) we received intelligence that a group of Taliban fighters were planning on ambushing an all-girls’ school,” he said. “We packed up that night and awaited the kids, and stood watch over them. Besides what you see on the news, Afghanistan is the most beautiful place with some beautiful people.”

He added, “I remember many nights I would just go outside our Marine house, look over the concertina wire and barriers at the mud hut houses in the villages the smell of fresh burning wood the cold air and the beautiful moon over the mountains, and only to be disturbed by the whine of incoming rockets and mortars destined for our base.  I recall seeing people dressed in traditional Afghan attire with turquoise-colored eyes. They loved pens and pencils and having their photos taken. They always wanted to show you they could write their names and numbers.”

While Mackel said he was able to connect personally and militarily with the regular Afghan soldiers, the Taliban forces were always close by.

“I made friends with many of my ANA soldiers. They gave good intel and told us of Taliban that had infiltrated the ANA and were a part of the ANA units,” Mackel said. “They (the ANA soldiers) told me that most Taliban changed sides because the Americans paid the ANA more than the Taliban (were paid), and they stood a better chance of surviving, which further made us very uneasy thinking that they would turn on us.”

Thus, he said, it was difficult to trust ANA soldiers, who could turn on U.S. troops.

As he watched events unfold during recent weeks, he said the situation was inevitable.

“All who deployed there knew once we left it would return back to Taliban rule,” Mackel said. “That’s been the way of Afghanistan for hundreds of years. I will say for those 20 years us service members who fought in Afghanistan did so for the American people, and to bring some stability to the nation.”

The Taliban is an Islamist political, religious and military movement that ruled Afghanistan from 1996 to 2001 until U.S. forces entered Afghanistan after the terrorist attacks of Sept. 11, 2001.

Then, Al-Qaeda, an extremist Islamic military group, gained a foothold in Afghanistan. Its leader Osama bin Laden spearheaded the attacks on the United States from his strongholds in Afghanistan. During its reign, the Taliban imposed strict rules on the Afghan people, especially women, based on Sharia law.

“The Tailban never did put up an honest fight. They used women and children as human shields, ambushed us and fled when faced with the overpowering force of American troops,” Mackel said. “ It (the U.S withdrawal) stings a bit because you know how bad it was while you were there and I can’t imagine how worse it will be now. You think of all your friends who were killed in action, wounded, those men and women who never came back home to families never started families, and those men and women who bear the physical and emotional scars robbed of our innocence our sanity, and it just leaves us asking ‘We sacrificed so much, all this for what,’ but it goes to show the dedication of the fighting men and women who served and continue to serve this great country.”