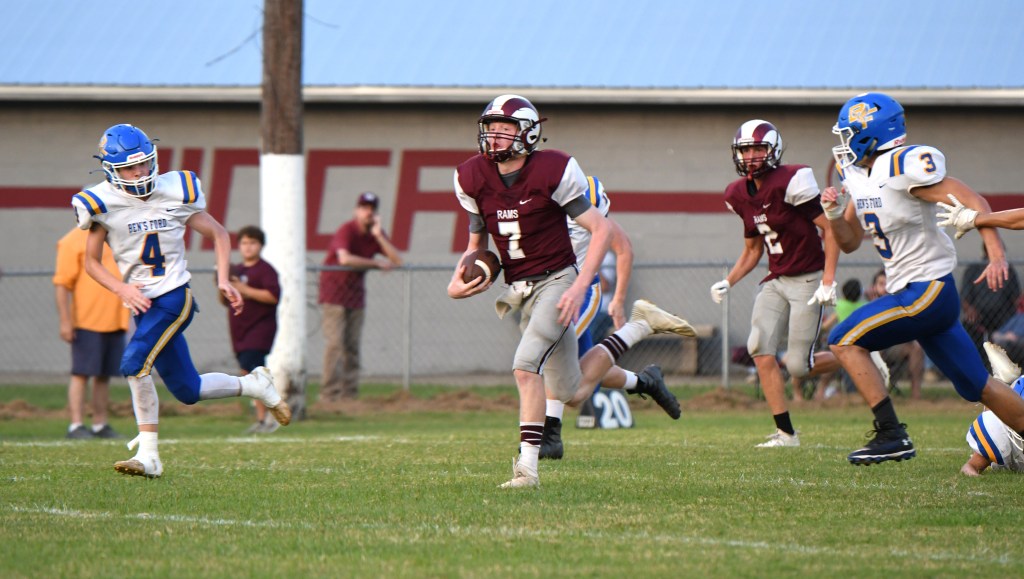 WOODVILLE — Andrew Sessions ran for two touchdowns and threw another one while younger brother Jacob Sessions had two touchdown runs of his own as the Wilkinson County Christian Academy Rams beat the Ben’s Ford Christian School Eagles 48-0 Friday night.

The game was originally scheduled to be played at Ben’s Ford in Bogalusa, La., but the damage left behind due to Hurricane Ida earlier in the week forced the game to be moved to WCCA.

It didn’t matter where the game was played because the Rams had their way with the Eagles. In fact, WCCA ran five offensive plays in the first quarter and scored on the first four of them.

Ryan Fisher had a 56-yard touchdown run at the 9:45 mark of the first quarter. Roderick “Slim” Bailey added a 28-yard touchdown run just 17 seconds later. Andrew Sessions then had a 79-yard TD run with 5:37 left and then threw a 74-yard TD pass to Delvin Jackson with 3:36 remaining to give the Rams a 28-0 lead by quarter’s end.

Andrew Sessions scored on a 13-yard touchdown run and then ran in for the two-point conversion with 1:26 to go for a 36-0 halftime lead. He finished with 117 yards on just four carries.

Jacob Sessions took over at quarterback in the second half and had touchdown runs of 14 yards in the third quarter and five yards in the fourth quarter.

Fisher ended up with 65 yards on three carries while Bailey only had two carries for 37 yards. Andrew Sessions went 4-for-9 passing for 108 yards. Jackson had two catches for 82 yards.

WCCA (3-0) next plays at Christian Collegiate Academy at 7 p.m. Friday.