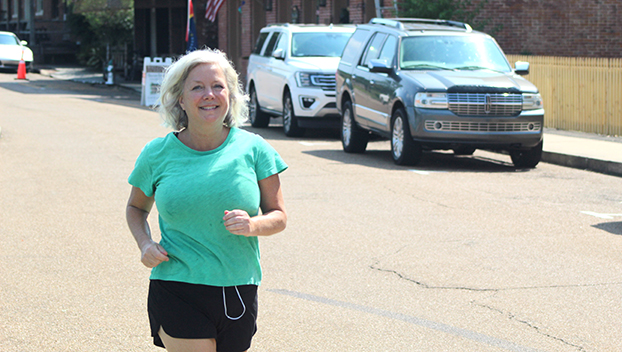 New Orleans native Shannon Jones runs along Silver Street in Natchez close to where The Dart landed Friday. She said she is staying with friends in Natchez until power is restored to New Orleans. Until then, she is running to keep her mind off of things. (Hunter Cloud | The Natchez Democrat)

NATCHEZ — New Orleans resident Shannon Jones ran down Silver Street’s hill close to where The Dart landed Friday morning. She said she is staying in Natchez until New Orleans gets electricity back.

While in Natchez, She is staying with friends Ann Miller and Dustin Miller. She met them while working at Galatoire’s in New Orleans. They had always been great customers and became good friends, she said. While they are gone on vacation, she is house sitting and taking time to run.

For 20 years, running has been a way for her to work on mental health. It got her through a divorce, Hurricane Katrina, COVID and Hurricane Ida. Endorphins released during her runs help the most, she said.

“Whatever is going on, I’m in a better place when I am done running,” Jones said. “I ran down here because I wanted to get in as much exploring as possible. I’ve been down here (Under-the-Hill) over 20 years ago. I wondered where it was and thought I would find it.”

Already, she made a brief trip down to New Orleans to check on her home. Thankfully, her house was fine after Hurricane Ida, she said.

Hurricane Katrina was a different story. Her cottage was under 12-feet of water during Katrina, and she lost everything, she said.

She evacuated with her child to St. Louis, Missouri for a semester until schools started back.

“It was an insane time to be in New Orleans,” Jones said. “I tore down my old house and built a new one. Some reason I had the wisdom to pack my art and antiques. I don’t know many people who pulled paintings off the wall.”

New Orleans has been her home since she was 21. Before moving to New Orleans, she grew up in St. Louis and lived in Maine for a few years. She said she does not think there was a better fit for her than New Orleans.

When COVID began, she stepped away from the restaurant business closing the door on a 25-year career at Galatoire’s. Her interim job is being a personal assistant to a family in the rental property business. She said she hopes to start a concierge service.