Lineman Louis Loy stands out as kicker for AC 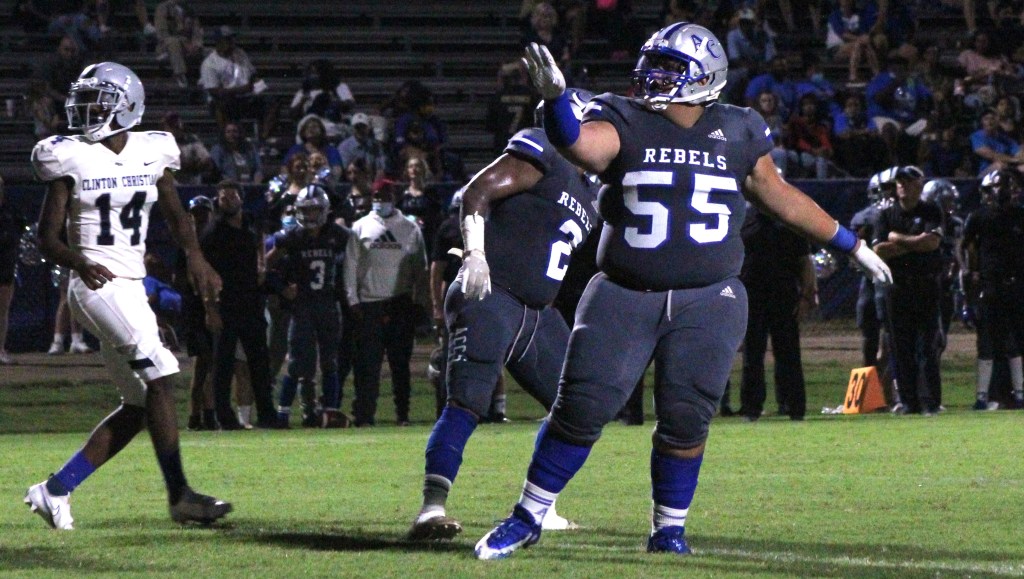 ACCS lineman and kicker Louis Loy is a soccer player for the Rebels. He said soccer is how he first started kicking field goals when he was at Natchez High. He transferred to AC his junior year. (Hunter Cloud | The Natchez Democrat)

NATCHEZ — Adams County Christian School offensive and defensive lineman Louis Loy looks down at his shiny silver mouthpiece. “I like to be able to see my reflection in it,” he said. “I’m just kidding. I like to stand out.”

He certainly stands out on the football field when the lineman steps up to kickoff or take an extra point. A soccer player, Loy began his football career at Natchez High School, where the head coach asked him to kick.

“I started at Natchez high my ninth-grade year. I was big on soccer. I played all my years at Natchez High until last year. I started as a kicker the whole year,” Loy said. “I have a lot of doubters because people think I can’t do the things that I do because of my size. I love to be up there proving them one.  A lot of times, I hear the other team’s coaches say, ‘they have a 300-pound kicker who is better than the ones I have.’”

He said one thing he loves about head coach David King is that “He is going to give you a shot at something if you believe you can do it.” His longest field goal was a 30-yarder against Wingfield when he played at Natchez High.

AC’s offensive success is why he has not made any further attempts, he said. While kicking, he said he is thinking about not messing up. If he does, he works on improving his game.

“I don’t like to see people disappointed in me,” Loy said. “If I don’t do it right the first time, I try it again the next time. If something does not go right, I’m going to try again until I get it right.”

Football is how Loy stays in shape for soccer season. Kicking helps his leg get ready for soccer, as does the conditioning with the football team. He plays central defensive midfielder for the Rebels.

Between field goals and kickoffs, he prefers to take kickoffs. He said he likes to block more than kick on field-goal tries because he doesn’t want to miss.

“On a kickoff, I have a chance to hit somebody,” Loy said. “One of my sky kicks last year, I put it in the right spot. I laid the guy out and saved a touchdown.”