Rebels playing in good form, must have strong performance against Green Wave 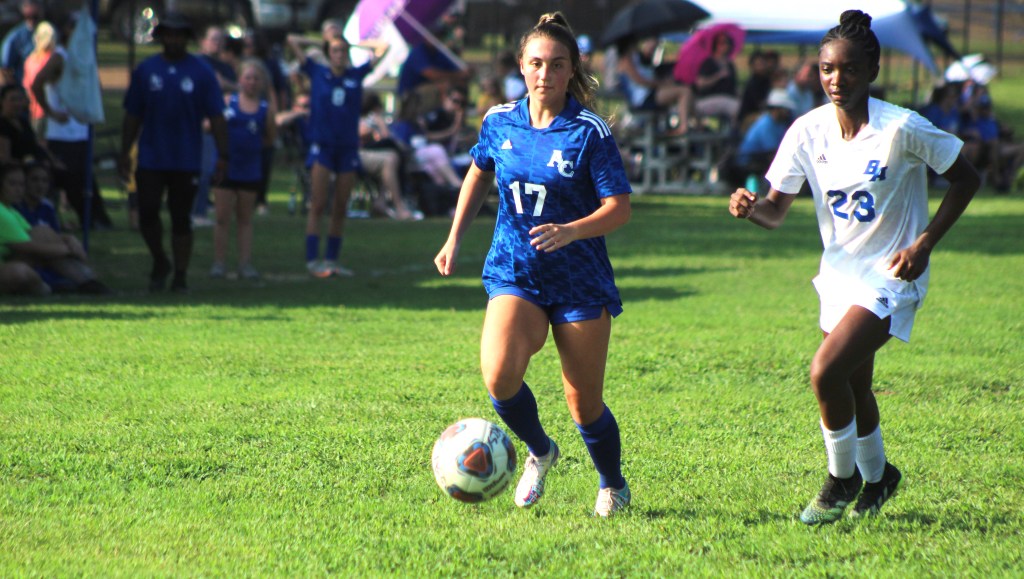 ACCS junior Ella Wilson is a creative midfielder who can drive the attack and develop goal scoring opportunities for Rebel forwards. (Hunter Cloud | The Natchez Democrat)

ACCS head coach Pam Weatherly-Williams said the team is ready and knows Cathedral head coach Dennis Hogue usually has a trick or two up his sleeve.

“We are looking forward to it. They are a worthy advisory,” Williams said. “Coach Dennis has been doing this for a long time. I enjoy competing against him and his team.”

The soccer rivalry between AC and Cathedral on the soccer field is competitive. And while the games can be intense, the players are often friends off the field.

During tournaments, the teams spend time around each other’s tents, support each other on the field and help with injuries, she said.

“It is just a healthy hometown rivalry,” Weatherly-Williams said. “I found they are competitive at home, but our girls come together when we are at the tournament. We are a family.”

Since the season started, AC has steadily improved. The team’s first touch is better, as is its finishing and defending. They are playing great soccer right now, Weatherly-Williams said of her squad.

“They are starting to click and get their rhythm,” she said. “We only lost two seniors from last year, but they were very pivotal players. My team is all coming together. I am very proud of them.”

AC has seen some positional changes as players step into new roles. Senior Maddie Campbell has seen a great deal of time upfront in the forward position, having shifted from defender.

Williams said she believes everyone on the team should be able to play multiple positions.

“I told my girls that ‘Any girl can play any position, on any given day and any pitch,’” Weatherly-Williams said. “At first, they were resistant. They are comfortable now, and they learned to trust me. They see they have potential. They see what they can do now that they have stepped out of their comfort zone and have a whole new vision of soccer.”

Keeping her cards close to her chest, Weatherly-Williams said effort will be the Rebel’s key to victory against Cathedral on Wednesday.

“We are going to have to play strong,” Weatherly-Williams said.