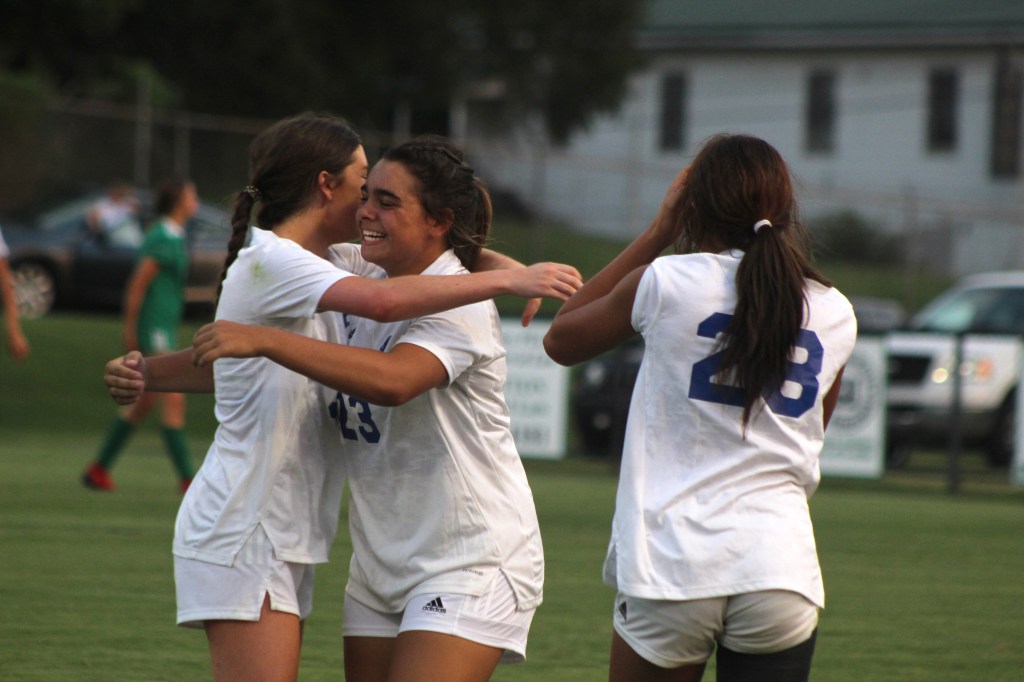 From kickoff, ACCS controlled the pace of the match. Maddi Cooley took the Rebel’s first shot after dribbling through defenders. Green Wave goalkeeper Meredith Lessley made a comfortable save to keep the game 0-0.

Cathedral created a goal-scoring opportunity of their own around the 15-minute mark. Green Wave winger Maddie Verucchi made a run down the left flank. She continued her attack into the box. She first dribbled around the keeper Sarah Gordon before slotting her shot home.

Verucchi continued to run as she got to midfield and celebrated the goal with her teammates along the way. Cathedral led 1-0 after weathering an early storm.

“When I got past the keeper, I was just thinking, ‘I hope I don’t miss,'” Verucchi said. “It went kind of downhill from there, but we started well.”

It took 10 minutes for the Rebels to respond as Maddie Campbell finished off a long ball for a goal. Her chip shot hopped over the outstretched hands of Lessley.

Cathedral missed a few opportunities in the first half, which were wide of the goal or just over the bar, Green Wave head coach Dennis Hogue said. Attackers needed to stay calm and composed in those moments, he said.

Campbell launched a free-kick into the box, and it went almost untouched as it found the feet of Brooklyn Timmons. She calmly tucked it away on the back post to give AC a 2-1 lead on the final kick of the first half.  It was the winning goal.

“It was exciting because we have been playing this team for so long and have not beaten them,” Timmons said. “I used to play here (at Cathedral). It’s my senior year, and I finally did it, so it feels good.”

Mallory Mcllwain scored on a rebound from a free-kick into the box. Midfielder Cooley made an impact on the pace of the game and controlled the midfield. She won multiple 50-50 balls, which Hogue said was one of the difference-makers in the game.

Goalkeeper Sarah Gordon made a couple of crucial saves for the Rebels. She said she had a lot of nerves before the game.

“I don’t usually get nervous, but with Cathedral, I get so nervous. I was freaking out,” Gordon said. “My coaches calmed me down, and I took a deep breath and played on. When Izzy Dupre had a shot, I sent it up and over. That was probably my best save of the game.”

AC had a commanding 3-1 lead, but the Rebels played on. Fighting to the last minutes, the Rebels sprung a counterattack down the right side.

Cooley played a pass out wide to Campbell, who dribbled into the final third. Her first shot was a low-driven ball saved by Lessley. On the rebound, Campbell scored a goal from the touchline on a tight angle.

“When I looked from where I was kicking, I thought, ‘oh my gosh. It’s either going to go over or miss the goal,” Campbell said. “It was exciting because I usually do not score from that angle. I was so happy because I thought of how proud my teammates and coaches would be of that goal.”

After the game, she chest bumped assistant coach Jeremiah Dent in the air. Weatherly-Williams wrapped her up in a bear hug. Tears streamed from her eyes as she turned away from her coach.

“It’s pretty special,” Campbell said. “It is exciting to beat any team but especially this team. We fought to the very end.”