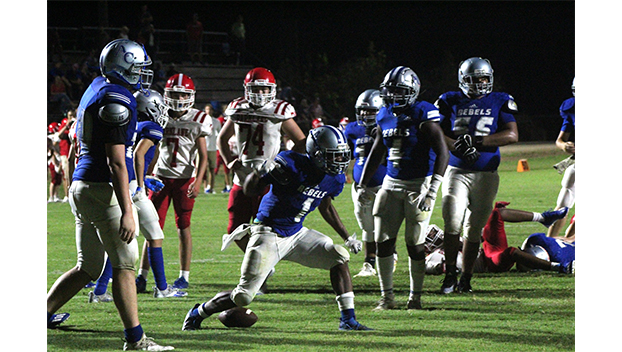 NATCHEZ — Parklane Academy scored two touchdowns in the second half to cut into Adams County Christian School’s lead, but it was not enough. The Rebels held on to win 40-22 in Thursday night’s junior varsity action.

Adrian Walker opened the game with his speed as he returned a punt  70-yards to the house. His teammates set up the long return by making the right blocks.

“It was interesting,” Walker said. “I told everybody I was going to blow them off the field on the first play, and I did exactly what I said I was going to do. My teammates blocked for me and were doing everything right in practice before the game, and it showed.”

AC added to its lead when Tristan Burns scored a 13-yard touchdown run to the left side to take a 12-0 lead over Parklane. The two-point conversion was stopped shy of the goal line.

On the next possession, Walker found open grass on a 79-yard touchdown run for ACCS. It gave them a 20-0 lead on Parklane. Tristan Burns scored on the two-point conversion to make it 22-0.

Parklane answered in the second quarter with a 26-yard pass into the flat. A Rebel defender almost swatted the ball away, but the receiver made the catch and raced to the endzone. Parklane scored on the two-point conversion to make it a 22-8 ACCS lead.

AC responded when Burns took a quarterback scramble and turned it into a 52-yard rush for a touchdown. He used misdirection and a stiff arm to work his way into the endzone. ACCS led 28-8 because of his ability to cut back and find open space.

“The kids had a big lead at the half and came out at half a little flat,” Freeman said. “If we could have gotten a touchdown after halftime, we could have cruised to victory. I give credit to Parklane. They are a good team and put themselves in the picture. I’m also proud of our kids. We could have laid down and given up, but they kept fighting”

With five minutes left, Freman said Walker asked for the football to be placed in his hands. The Rebels drove the field and got inside the 10-yard line.

A couple of plays later, he scored on a 9-yard rush up the middle to expand AC’s lead to two possessions, 34-22. He yelled ‘let’s go,’ as he fist-pumped the air and celebrated with his teammates.

“I was doing it for my team,” Walker said. “It was a dog fight, but we stayed in there, and we stayed humble. We stayed on our toes and did everything right to get the win.”

Braden Poole scored on an eight-yard rush on the last play of the game. AC held on to win 40-22. Walker scored three of those touchdowns.

Freeman said he is quick and works hard. He carries the ball like a workhorse for the team. On one play in the first half, he carried four tacklers on his back for about 10-yards.

“He has worked hard all summer,” Freeman said. “It is his ninth-grade year. I’m expecting a lot from him this season.”