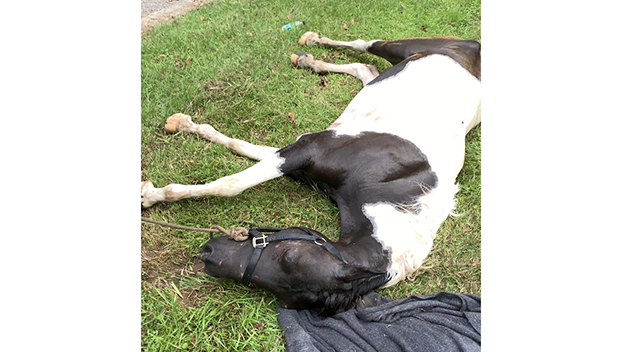 A horse lay on the ground Wednesday on Lee Road after its owner allegedly rode it for seven hours without water and beat it with a knotted rope. Photo courtesy of Adams County Sheriff's Office.

NATCHEZ — Adams County Sheriff’s Office arrested a man on a felony animal abuse charge for allegedly beating a horse with a knotted rope and riding it until it collapsed.

On Wednesday, Adams County Sheriff’s Office received a call from a concerned citizen about a horse lying in a ditch being beaten with a red rope with a knot in it. They met Demarcus Lavelle Ikard, 24, of Adams County on scene. 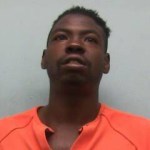 “During our conversation he admitted he had ridden the horse from U.S. 84 at Highway 33 in Franklin County all the way out to Lee Road off of U.S. 61 North near the Natchez Adams County Airport,” said Major Frank Smith of Adams County Sheriff’s Office.

A report was made at approximately 6 p.m. and Ikard said he started riding at 11 a.m. that morning, around seven hours earlier, Smith said.

“He said he stopped one time but he hadn’t watered the horse or anything like that and the horse just fell out on him,” he said. “He was beating the horse in the face and in the head with this red knotted rope. He said he was trying to get it to get back up. Deputies observed numerous abrasions and the horse’s eye was swollen shut.”

Ikard is detained at the Adams County Jail with a felony animal cruelty charge on a $50,000 bond, he said.

Conviction of such a charge could result in a prison sentence between one and five years and fines between $1,500 and $10,000, according to Mississippi law.