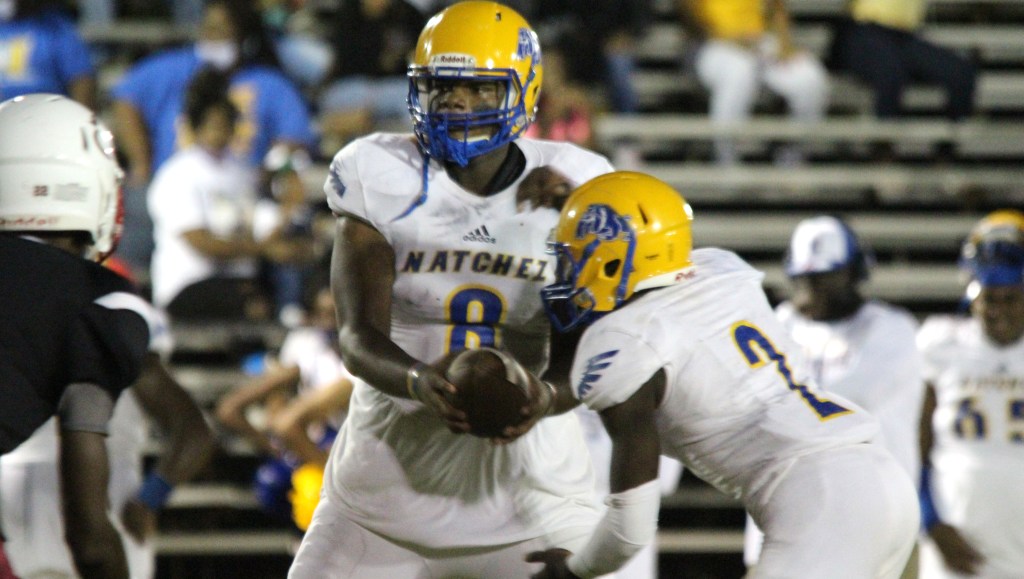 It was a meeting of two totally different styles of offensive football Friday night in Monticello and though 5A Natchez High took a 34-20 win over 4A Lawrence County back down Highway 84, the game was much closer than the final score looked.

Natchez senior quarterback Kyreek Murray clocks in at 6-foot-4, 280ish-pounds and would be the biggest offensive lineman on the team, if that were his position. The hefty lefty operates out of the shotgun and gets rid of the ball in a hurry to a deep group of skill position players, head coach Randy Craft said.

“He had a good game spreading the ball around. He had four touchdowns,” Craft said.

Lawrence County and coach Jesse Anderson use the double wing to move the ball on the ground and prefer to play a possession style of football as they often run between the tackles.

Murray and Natchez struck first as he hooked up with Damarcco Blanton on a 38-yard touchdown pass with 5:06 remaining in the first quarter. The scoring drive was aided by two Lawrence County penalties, a recurring theme throughout the game.

LC had two penalties on their first offense drive and two on their first go-round on defense. For a team that’s mainly keeping the ball on the ground, a pre-snap penalty that makes it 1st-and-15 instead of 1st-and-10 can be disastrous.

Lawrence County sophomore fullback Ahmad Hardy got his team to the NHS 2-yard line on the last play of the first quarter and on the first play of the second, LC quarterback Elijah Helton pushed in on a sneak. The Osvaldo Del angel PAT kick was good, and the Cougars led 7-6.

The scoring drive for Lawrence County was aided by a 15-yard penalty when Natchez freshman defensive lineman Jamari White stepped on the back of an LC offensive lineman in front of two refs, two bands and two sets of bleachers filled with fans.

It looked like the Cougars might get their first stop of the game on the ensuing drive, but on 4th-and-10 from the Lawrence County 20-yard line, Murray scrambled left and found Mike Williams Jr on a touchdown.

The pass sailed high and Williams Jr leapt to make the catch on the 10-yard line and then ran past two stunned Cougar defenders to get in.

The 2-point conversion to Joshua “Kash” Thomas was good and Natchez led 14-7 with 9:42 until halftime.

Hardy responded with a 4-yard TD run on the next Lawrence County drive. The Cougars elected to go for a 2-point try, but it failed, and Natchez still led 14-13 with 3:52 until the break.

Two 15-yard penalties on the ensuing kickoff backed Natchez all the way back to their own 5-yard line to start their next drive.

It took them seven plays to cover those 95-yards as Williams Jr. caught a 7-yard pass from Murray and then hauled in the conversion pass to make it 22-13 with 1:21 remaining.

Lawrence County didn’t play for halftime though. The Cougars strung together a few long runs and with nine seconds left in the first half, Hardy ran in for a 17-yard TD that made the score 22-20 at the horn.

Natchez went up 28-20 in the fourth quarter and Lawrence County quickly fumbled on their next offensive drive.

The Cougar defense would get a stop inside the red zone to deny another Natchez score.

Needing to go 97 yards in just over two minutes to tie the game, the Cougars turned the ball over on downs, allowing a late Natchez touchdown that provided the final margin of victory.

“We had two crucial turnovers. We forced a fumble in the third quarter,” Craft said. “In the fourth quarter with 3 minutes left, Troy Jones made a big hit on the Cougar receiver and Bert Hughes intercepted it. We milked the clock and added 8 points to win with a rushing touchdown by Carl McDonald.”

Coach Randy Craft and his Bulldogs (2-0) are on the road again next week as they travel to Hazlehurst. Lawrence County (1-1) will also be traveling as they face Taylorsville in Smith County.

Bastrop holds on to beat Ferriday 16-0