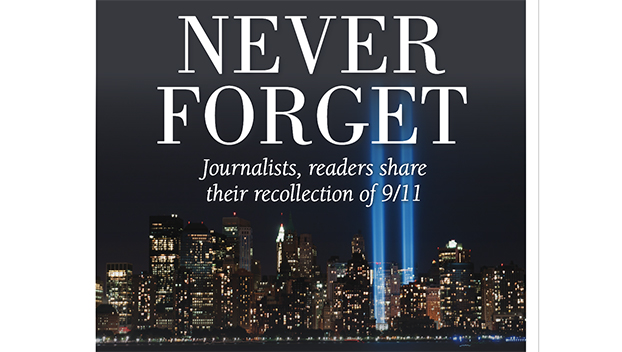 Thanks for printing comments about this event in our country’s history.

Back then, I drove for Durham School Services, and I was at home between bust routes and watching TV before leaving to drive the afternoon route. I watched the horrible scenes on TV and heard the news.

That afternoon I taped an American flag on the front left corner mirror bracket on the bus after I realized how to attach the flag so it would not hinder the view while driving the bus. A few days later, over 40 of Durham’s buses also had American flags proudly flying in the wind as we did our bus routes!

Later, maybe months later, my employer informed me that I would have to provide them with a new social security card showing my birth certificate name or the first name on it, rather than the name that was on it at that time. (I had always been known by “Jacky Campbell” like a nickname. It took about six months to have everything changed!) My bank informed me that the President, the younger Bush, I believe, signed the Patriot Act which made stiffer regulations for banks, job applications, etc. to combat terrorism entering our country.

I was told to change my name on all business accounts, utilities, but my employer told me they were only following orders coming from their corporate offices. Durham was going to hold my paycheck until I presented my corrected social security card.

When I arrived at our social security office to have my name changed on my social security card, they told me they needed two legal documents showing the name I had already been using as proof that I was who I said I was.

I took them a copy of my tag receipt and registration and a copy of my land deed as recorded by a lawyer at the courthouse. My new social security card was soon issued to me.

Job applications soon began to include more questions about mothers and fathers and about their place of birth. Secret codes are texted back to email accounts. Security questions were added and had to be answered as part of the application process. Pictures now have to be identified (online), such as picking out the ones showing a traffic light or the ones showing playground equipment, and on and on it goes.

When I applied, with much help from my supervisors, with Ecco Rides to be a bus driver for them, I answered all the questions, but my supervisor keyed it in on their computer. It took a cell phone and two different computers all going at one time in order to complete that job application. Applying for work did not used to be so complicated, so we can say 9/11 events likely played a role.

Wow! I had thought that the most unusual part of my day would be the fact that I almost made it “on time” to be at the office early, as requested. My boss and I were scheduled to do some routine traveling to an out-of-town courthouse that day to do title work.

All of the sudden my co-worker burst into the office with an unmistakable look of shock and disbelief on her face.  She said that she had just heard on her car radio that an airliner had hit one of the twin towers in New York City!

Of course, we were briefly shocked and saddened about this terrible accident until she continued with her second sentence: “And then they said that a second airliner has hit the other tower!”  At that moment, it began to sink in to all of us that this was no accident. Our time spent in the vehicle on our out-of-town work trips was usually filled with lighthearted conversations and often with memories we shared from our childhood, but that day was a definite exception.

Our mood was gradually becoming more and more somber as this new reality was consuming us like a storm cloud.  When we arrived in Winnsboro, someone had brought a small TV set from home and set it up in the Office of the Clerk of Court.

Although we did the work we had come to do that day, we also hovered, off and on, with the courthouse employees around that small set as events unfolded and the realization gradually sunk in to all of us that our country would never quite be the same.

I have many memories of my 25 years at McLemore Law Firm but that day shared with Jack and Carla will live on in my memory forever.

‘Going on Twenty,’ By Bill Beane

Twenty years ago, I was in Belarus, between Poland and Russia, meeting the love of my life, Rita Kavaliova.

It was a wonderful time exploring her country and Kiev, Ukraine, and their cultures.

On Sept. 9, I flew away convinced she was the one I wanted to spend the rest of my life with.

I spent the night in Frankfurt, Germany, and flew the next day to Atlanta and on to Baton Rouge. The jet lag was awful.

It was so bad I stopped for coffee in St. Francisville and started back towards Baton Rouge.

I discovered my mistake, turned around and made it home somehow.

The next morning, planes were hitting the twin towers in New York. Three hours later all planes in the United States were grounded.  Flights from Europe were stopped in Gander, Newfoundland, or turned around.

If I had delayed my return one more day, it would have been two weeks before getting home.

It was a terrible day but she is still the love of my life.