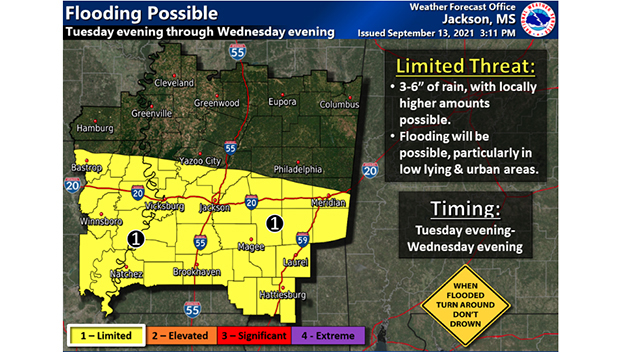 NATCHEZ — Rainfall and possible flooding in low lying areas could occur in Adams County Tuesday and Wednesday from Tropical Storm Nicholas, according to the National Weather Service.

Southern counties in Mississippi surrounding Natchez were labeled as having a “limited threat” from the storm as of Monday afternoon.

“As moisture from Tropical Storm Nicholas affects our region, rainfall of three to six inches will be possible in the Limited area, especially in the southern parts of the area. One to two inches of rain will be possible elsewhere,” National Weather Service representatives at Jackson reported.

“The track has moved east and put Adams County in the bullseye for Thursday morning, as a depression,” Adams Emergency Operations Center Planning Chief Tom McGehee said in an email to EOC members Monday afternoon. “The prediction of rain has increased to plus 6 inches over 5 days.  Flash flooding could be a concern.”

McGehee said at 2 a.m. Tuesday, Adams County is projected to be just inside the area to receive “tropical force winds” that should be “decreasing shortly after.” Strong wind could also cause trees to fall and hinder emergency responses, he said.

At 1 p.m. Nicholas was east of the southern coast of Texas, moving north over warm water, and projected to land on Texas central coast late Monday night or early Tuesday morning as a Tropical Storm.

“There is concern it might barely achieve Cat. 1 Hurricane status,” McGehee said. “… At this point, Adams County Emergency Operations will not directly respond but will be monitoring remotely.”

He said the Adams County Safe Room may open as a shelter if we come under a tornado watch but is not planned to open for any other reason.