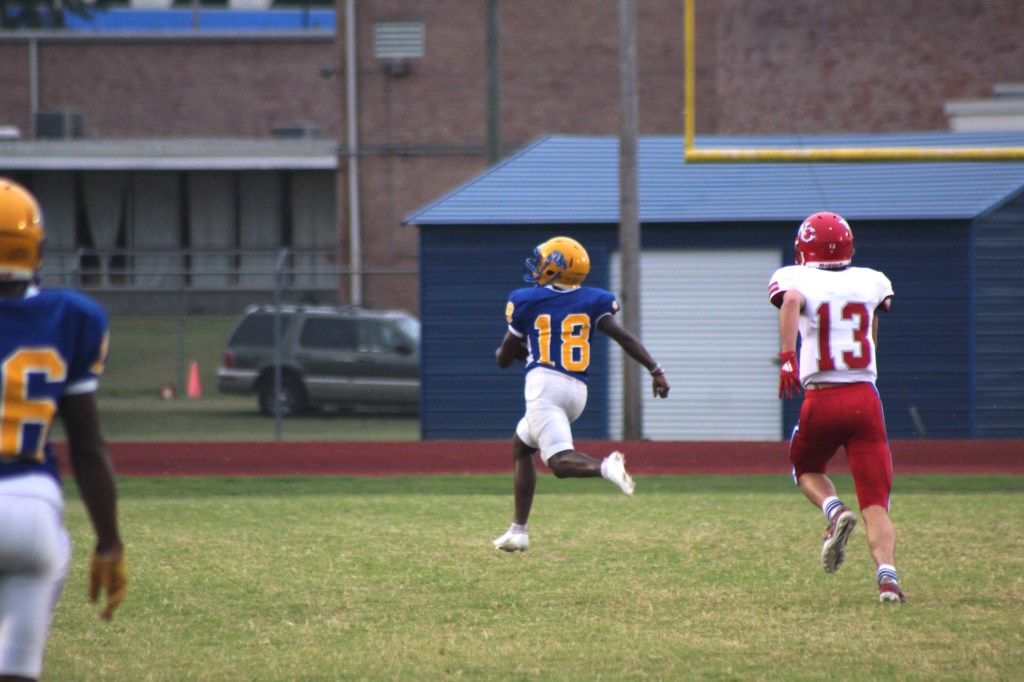 Natchez defensive back Jessie Grayson scores on a fumble recovery. He ran 75 yards after Warren Central's quarterback fumbled the exchange on a handoff to a wide receiver. It was the only touchdown for Natchez in their 20-6 loss Monday night. (Hunter Cloud The Natchez Democrat)

Natchez made the first big play when quarterback Fairley threw a pass into the endzone on a fade route. Bulldog defensive back TJ Johnson high-pointed the ball and made the interception to prevent a touchdown late in the first quarter.

Unable to take advantage of the turnover, the Bulldogs had to punt. A couple of snaps later, Natchez put themselves on the scoreboard.

Warren Central quarterback Ryan Nelson fumbled the exchange with his receiver in motion. Defensive back Jessie Grayson was there to pounce on the ball. He scooped it up and sprinted 75 yards to the endzone to give the Bulldogs a 6-0 lead with 8:25 to go in the 2Q.

“He is one of our tenth graders. He made a spectacular play,” Craft said. “It is something we work on in practice. It is good to see kids apply things to a game situation. He is one of our rotation guys and plays varsity. He gets some snaps on Friday nights. He was limited in how much he could play tonight.”

Warren Central quickly rebounded as Lane Gordon rushed up the middle and scored a five-yard touchdown. The entire first half, he was a menace to the Bulldog defense. He cut up the field in 5 to 20-yard bursts. Their two-point conversion failed.

The Vikings took the lead on Fairley’s 35-yard pass from Zac Evans on a post route to take the lead 13-6 at halftime. Fairley added another touchdown when he rolled out to the left side and powered his way into the endzone on a 5-yard gain. Now, the Viking’s lead was 20-6 with 3:50 left in the 3Q.

Warren Central drove to the 10-yard line late in the fourth quarter, but the Bulldogs held strong at the goal line. They pushed their opponents back before they forced a turnover on downs with 4 minutes left.

“With our JV guys, we are still getting them used to the idea of ‘just because they get in the red zone, we don’t have to give up points.’ It builds confidence when they get a stop like that.”

At 1:50 in the 4Q, Jaylin Davis busted a run out to the right side for Natchez. He gave the Bulldogs a chance to score late in the game by getting them across the 50.

Continuing their drive down the field, the Bulldogs found themselves at the 15-yard line with 37 seconds left. They were down by two touchdowns when Davis threw the ball over the middle of the field. Viking defensive back Sam Thigpen leaped into the air and intercepted the ball ending the game.