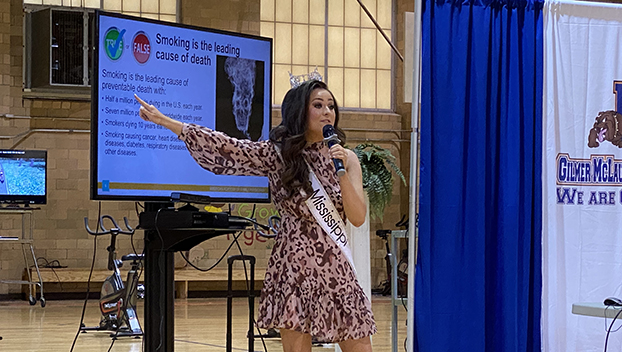 NATCHEZ — Fourth graders at McLaurin Elementary School had their eyes opened on Monday morning to the harmful effects of tobacco and smokeless cigarettes.

Their gasps were loud and clear when they learned from Miss Mississippi Holly Brand that pack-a-day smokers spend about $49 a week on cigarettes, which amounts to more than $2,500 a year.

“What? That’s a lot of money!” exclaimed Jordan Barnes, a McLaurin student.

Brand was in Natchez on Sunday and Monday as part of her campaign to encourage Mississippi children to never use tobacco or nicotine products. Her discussion with the students was based on “Tar Wars,” and anti-tobacco campaign put together by the American Academy of Family Physicians. She presented the students with a list of true and false questions, the answers to which surprised many of the students.

“Smoking is the leading cause of death in the U.S., true or false,” Brand asked. Most of the students answered this question correctly.

“That statement is true,” Brand said. “Smokers die an average of 10 years earlier than non-smokers on average.”

“Arsenic is in rat poisoning. And ammonia is in products we use to clean our toilets,” she said.

Brand discussed the highly addictive nature of nicotine, including those products like vaping, which is being marketed to children as a healthy alternative to smoking.

“That’s not true. The nicotine vapor, which they call juice, is more addictive than cigarettes,” she said.

Marketers name the nicotine “juices” things like Bubble Gum and other candy-like names is an attempt to make the vaping and e-cigarette devices more attractive to young people, Brand said.

“Deep down this really worries me,” Gibson said. “It’s an attack on our children.”

“You are never too young to make a difference,” Brand told the McLaurin fourth-graders. “You can make a change in your community. Write your elected officials and urge them to make Natchez a smoke-free community. Write to the FDA and urge them to restrict the marketing of e-cigarettes. Join other groups like The Truth Initiative,” which is a group dedicated to ending tobacco use.