‘It just about severed her leg,’ Leg restraint leads to amputation for found dog 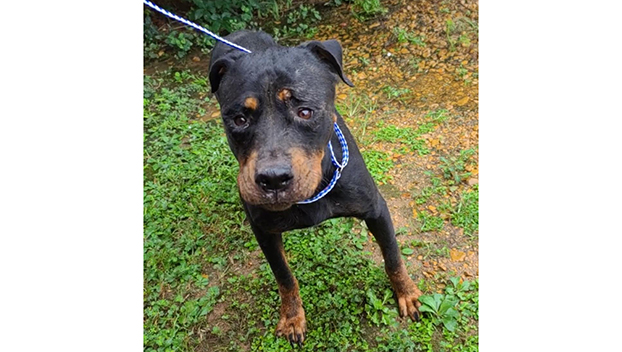 A dog found in the Morgantown Road area Monday had an almost severed rear leg from a cable tied around it and will have to have amputation surgery. (Submitted photo)

NATCHEZ — A Rottweiler found Monday near Cutting Edge Glass on Morgantown Road had cable wrapped around her leg so tight that her foot was almost severed, said Investigator Karen Ewing of the Adams County Sheriff’s Office.

Ewing said the cable was tied in a way that it appeared to have been done deliberately.

“I don’t know if it was to be mean or if someone tried to restrain her and she got off,” Ewing said. “It just about severed her leg.”

Ewing said a people who were looking out for the dog said she disappeared for a month before she was found in this condition.

Shannon Wilson at Cutting Edge Glass said the dog used to show up around the shop with another dog and she would feed them.

“She never would let me get close to pet her but I would put food out for them. We have a Rottweiler and always thought that this Rottweiler could’ve been the sister to mine. She is a sweet dog. I would share my dog food with them,” she said.

Wilson said she fed the dog for about a year before noticing she hadn’t seen the dog in the last month. On Monday, Wilson finally found the dog.

“Her foot looked like it was just hanging by the cable like it had been there a while,” Wilson said. “I didn’t know what to do for her so I called the sheriff’s office … She will have to have surgery. I believe she is going to be saved, but they will have to amputate her leg.”

The dog was taken to Tracey Peltier at Southside Veterinary Clinic for care.

Ewing said officers do not know who was responsible for injuring the dog. It remains under investigation.

“She roams and went everywhere,” Ewing said of the dog.

Ewing said even through her pain, the dog was sweet and didn’t mind being petted.

“Whoever did this is horrible,” she said. “She isn’t a mean dog. She might chase a few cats but what dog doesn’t? Nothing she could’ve done would warrant someone tying a cable around her leg, and you can tell it was deliberate.”