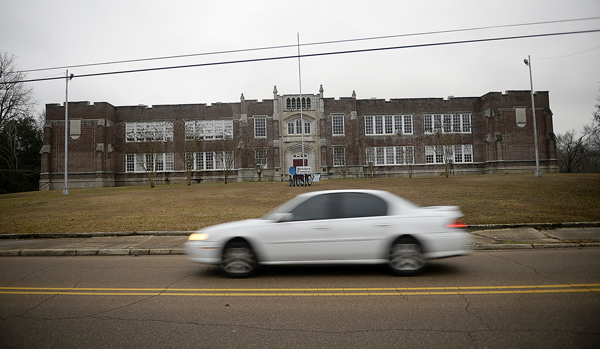 NATCHEZ — With help from the Natchez Adams School District, officials are one-step closer to completing the sale of the former Margaret Martin school to Dunleith Investors.

During their Tuesday meeting the school board agreed to give up approximately 50 feet of property they own adjacent to the former Margaret Martin school on Homochitto Street to the City of Natchez.

Natchez City Attorney Bryan Callaway said conveyance of the land was a necessary step of completing the sale of Margaret Martin to the J Collection, a New Orleans-based hotel group that owns Dunleith.

When the school district gave Margaret Martin back to the City of Natchez approximately 25 years ago, the 50-foot strip of concrete parking lot to the right of the building when facing it from Homochitto Street was left off of the property description.

“I don’t know why it was left off,” Callaway said. “Perhaps it was an oversight.”

City officials have been progressing towards selling the property since October.

“We needed to get this cleaned up and then we ought to be able to close (the sale) shortly,” Callaway said.

The hotel group is planning to make Margaret Martin an extension of the luxury hotel service offered at Dunleith by renovating the building into a multipurpose center with a restaurant, event space and hotel rooms. They also have plans for a theatrical school there through a collaboration with local movie producers Tate Taylor and John Norris.

In return for giving the property to the city, NASD would benefit from tax payments on the property once it is sold to a private developer, Kuehnle said. He added because Margaret Martin is still public property, it is currently not on the tax rolls.

“Once Margaret Martin is privately owned, it becomes taxable and the school district would benefit from it,” he said.

The school board passed a motion to proceed with gifting the land to the city by a vote of 4-0 with Dr. Brenda Robinson absent from the meeting Tuesday.

Board member Dianne Bunch, who offered the motion to donate the property to the city, said it was necessary “for a potentially big economic development.”

“It seems like it would be a big economic boost,” she said. “We are not using it and what we really want is economic development. It’s big enough to give us major revenue.”

However, board member Thelma Newsome said she voted yes to the motion reluctantly.

“I vote yes, but I ask that we don’t give away any more land. We’ve given (the city) Margaret Martin and both of the Carpenter School buildings and I don’t know of any benefits that we’ve reaped,” she said.