Vikings need to be physical, limit turnovers, play with pride against Tigers 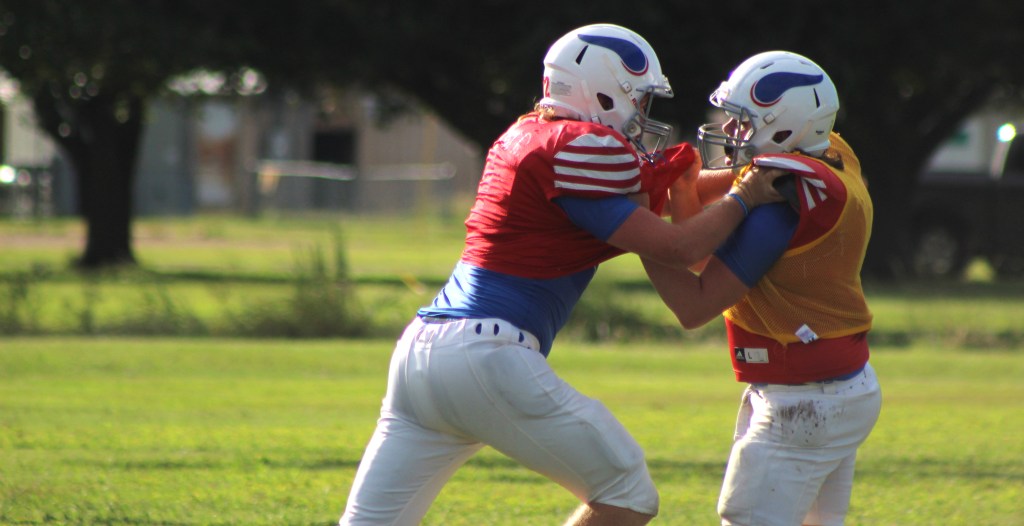 Vidalia is preparing for a battle with Jonesboro-Hodge this Friday. At left, Braden Goldman blocks Luke King, right, during practice on Wednesday afternoon. (Hunter Cloud | The Natchez Democrat)

VIDALIA, La. — The Vidalia High School Vikings look to get back on the winning track when they play host to the Jonesboro-Hodge High School Tigers Friday night at Dee Faircloth Viking Stadium.

Kickoff between the Tigers and the Vikings is set for 7 p.m.

Both teams are currently 1-1 this season. Vidalia is coming off a 40-6 loss at LHSAA Class 3A Jena High School last Friday night while Jonesboro-Hodge stunned Class 5A West Ouachita High School 41-20.

“They’ve got a lot of tradition. They’re big. They’re tall and athletic,” Vikings head coach Michael Norris said of the Tigers. “They’ve got the same record we do. They beat a 5A team in West Ouachita last week. They’re going to throw the ball around on offense and they’re going to get after it on defense. So, we’ve got to be ready.”

Norris said Vidalia did execute its game plan against a good Jena team. The Vikings just ran into “(They were a) big football team and they pushed us around a little bit. They did it a little better (last) Friday night,” Norris said.

Norris added that each week in practice the Vikings work on cleaning up stuff. Additionally, they scout the other team on film to prepare for what they have to get ready to face.

“We work on defense assignment alignment. On offense, we work on our execution,” Norris said.

As for how the rain associated with the remnants of Hurricane Nicholas has affected Vidalia’s preparation for Jonesboro-Hodge, Norris said practice has continued. “Yesterday (Tuesday) we practiced and it rained a little bit. It looks like we got lucky today (Wednesday) because the rain moved out earlier. It looks like the conditions we’ll see Friday night.”

Norris said what concerns him most about the Tigers is that they are tall and athletic.

“They’ve got a tall, strong, athletic quarterback and their receivers can catch the ball. But we worry most about what we do. If we execute what we do, we don’t worry about what they do. (It takes) energy, effort and focus,” Norris said.

The key to a victory will be simple, he said: “Score more points than they do. We’ve got to limit the turnovers and be more physical. Anybody that gets out there with the horns on their helmets or Vidalia on their chest needs to do their job and be successful.”