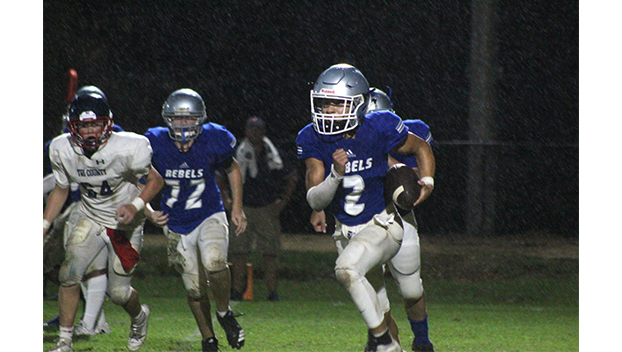 ACCS JV quarterback Tristan Burns runs out to the left of the formation late in the fourth quarter. He lowered his shoulder and got a key first down to ice the game. AC beat Tri-County 40-22. (Hunter Cloud | The Natchez Democrat)

NATCHEZ — Adams County Christian School junior varsity head coach Mathew Freeman pulled quarterback Tristan Burns over to the sideline. “Bounce it to the outside. The defenders are crashing in on you,” he said into his earpiece. AC was up 40-22 on Tri-County

Burns ran back onto the field, rain drizzling down underneath the stadium lights. “Catch the snap,” Freeman said.

Burns took the snap and ran to the left side of the formation. He stuttered to freeze the perimeter defender before turning up the sideline. He lowered his shoulder on the safety and got the first down, icing game.

“I felt it was something I had to do to close out the game,” Burns said. “My offensive line was blowing people off the ball and communicating well. Everyone has gotten better since last week.”

Football is an outlet

A physical player, Burns plays with a chip on his shoulder. He is not scared of contact. Instead, he relishes it. Inside the red zone, Burns met the quarterback at the pylon.

Lowering his shoulder, he sent him tumbling out of bounds. He was still frustrated about a defensive holding call on him a play earlier.

His football career began in seventh grade when he first got into the game, he said. In reality, it was the first year his dad finally let him play, Freeman said. The physical sport is an opportunity for Burns to take his anger out on the field. Football also gives him an outlet to honor his late grandfather Jim Brixey.

“He passed away from COVID on Christmas Eve,” Burns said. “He was a father figure to me. I’ve been playing for him ever since. He was always calling me after games and wondering how I did. I think about that all the time. It motivates me to push harder. I was with him every day.”

He wears a plate to protect the lower back and tailbone, which has medical tape, it says “rip papa.” Every time he takes the football field, his grandfather is still with him.

Hugging coach Freeman, he walked off the field.

Before the game, Tri-County had not yielded any points, Freeman said. The Rebels scored 40 on them. They came out swinging in the first few possessions and never looked back. Adrian Walker scored five touchdowns for the Rebels. Walker had five touchdowns and about 280 yards rushing. Burns had 150 yards rushing and a touchdown in the game.

In his post-game speech, he told the team how proud he was of their performance. Tri-County blocked a few punts in the game, so Freeman apologized for not running enough reps on special teams in the week of practice beforehand. AC stole some possessions from Tri-County by creating some with onside kicks, he said.

“Winning tonight was important to win the district,” Freeman said. “Caleb Daugherty played some beautiful kicks tonight. We blew up their return and were able to recover the ball. It is always good to succeed at something we try to game plan and do.”