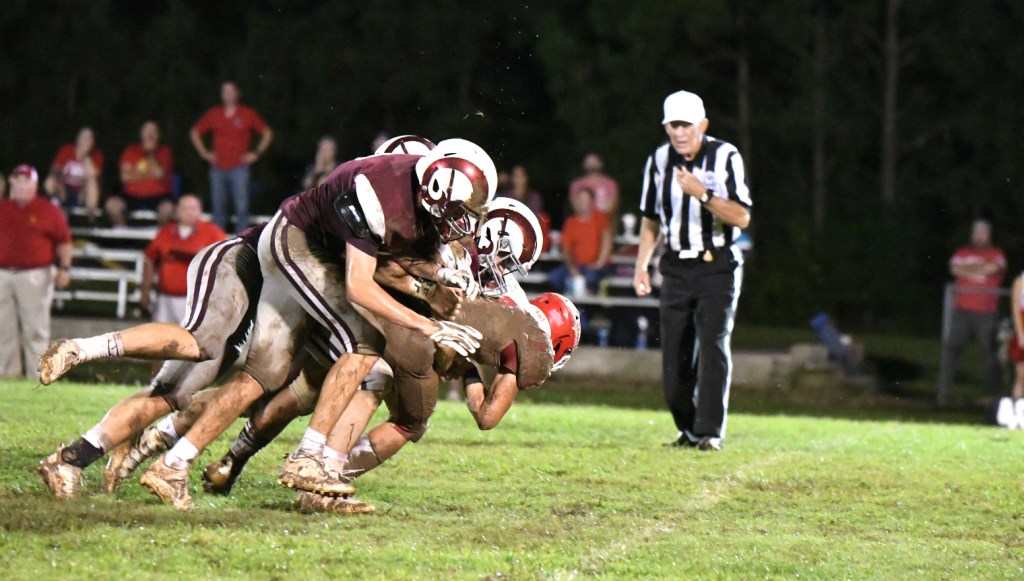 Grant Murray sacks the quarterback for Newton County Academy for the Rams. WCCA won 32-0 in a mud bath. (Travis Murray | Special to The Natchez Democrat)

Sessions completed four of five passes for 106 yards and one touchdown to go with 10 carries for 117 yards and two touchdowns against a good Newton County Academy team that entered this game on a three-game winning streak.

A five-yard touchdown run by Sessions with 1:07 remaining until halftime and Fisher’s second two-point conversion run of the game gave the Rams a 24-0 lead that they would take into halftime.

After a scoreless third quarter, Sessions connected with Fisher on a 46-yard touchdown pass and with Nathan Mudd on the two-point conversion pass with 3:57 left in the ball game to put the icing on the shutout win.

WCCA’s defense came through in a big way, turning away the Generals four times inside the Rams’ 10-yard line — three on fumble recoveries and once on downs. Reggie Mattire had a fumble recovery at the nine, Fisher at the five and Orgeron at the 10. Hayden Oliveaux recovered a fumble near midfield.

Mudd finished with a team-leading 16 tackles while Fisher had 13 tackles of his own and Caleb Harvey had 10 tackles. Grant Murray had one sack.

WCCA (5-0) travels to Vicksburg to take on Porter’s Chapel Academy Friday at 7 p.m.