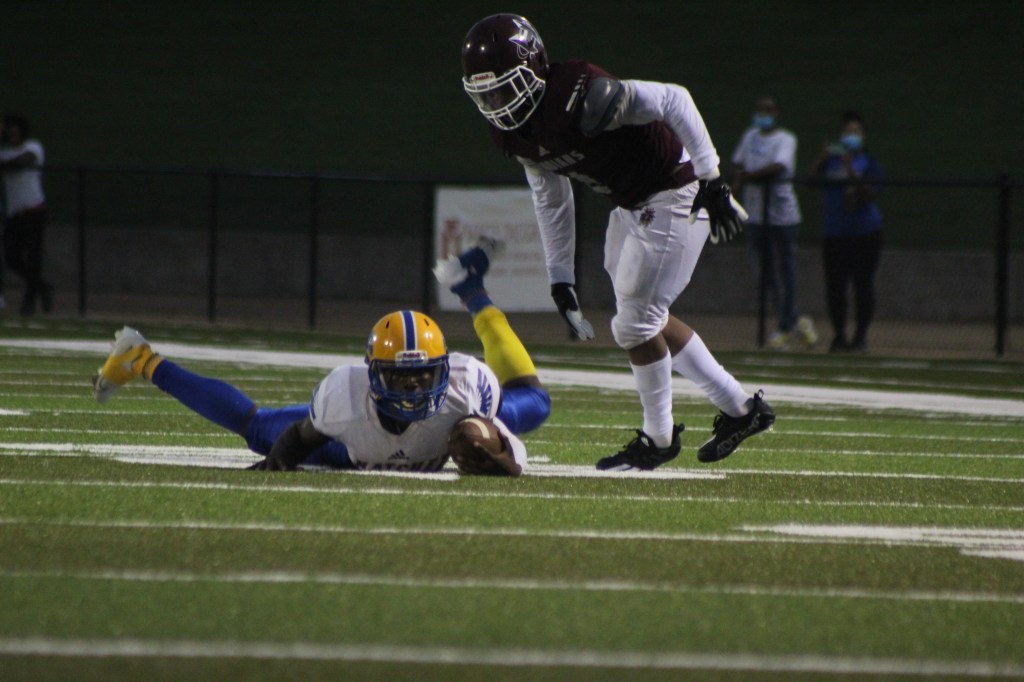 Traylon Minor is upended at the line of scrimmage a play before he scored. Natchez fell 20-14 to Hazlehurst at Co-Lin’s campus Saturday night. (Hunter Cloud The Natchez Democrat)

WESSON — Natchez came up short of beating Hazlehurst under the lights at Co-Lin’s campus. The Indians hung on to win 20-14.

With five seconds to go in the game, Natchez was on the Hazlehurst 30 yard line. Quarterback Kyreek Murray looked to his right and saw a wide-open Joshua Thomas in the front corner of the endzone.

Murray lofted a pass towards the endzone, but it fell incomplete out of bounds. Head coach Randy Craft said he was surprised it came down to a last-second play.

“It was a game we weren’t expecting to be in a dog fight in,” Craft said. “If we keep the throw inbounds we give him a chance to make a play on it.”

The game would not have come down to a last-second play had wide receiver Demarcco Blanton not picked up a crucial first down with 40 seconds left. His sliding catch on fourth down kept the Bulldogs alive.

“Demarco has been playing big for us,” Craft said. “He is the guy we go to when we have the game on the line.”

Hazlehurst opened the scoring as their running back Cameran Hawkins punched in a six-yard rush to give Hazlehurst a 6-0 lead with 5:15 left in the 1Q.

Natchez struggled to get anything going on offense at first. Their defense eventually forced a punt and started a new drive at the 40.

A handoff to Demarcco Blanton provided him the opportunity to get to the perimeter. He raced down the sideline and into the endzone tying the game at 6-6.

The Indians responded with a 6-yard rush by Jakeevion Minor to take a 12-6 lead with 11:52 in the second quarter.

Natchez started another drive but went three in out. A shanked punt set up Hazlehurst with great field position. They drove it inside the 10.

“With football, you always want to push them as far as you can and we set them up at the 35 with a short field,” Craft said.

Hazlehurst’s Quatavis Stewart scored on a 3-yard screen pass to the left side. The Indians added a two-point conversion to make the game 20-6.

A swing pass late in the second quarter gave Natchez new life as they trailed by just a touchdown. Quarterback Kyreek Murray hit Traylon Minor on a 45-yard touchdown pass and he dove into the endzone.

“Traylon is always going to run hard whenever he gets the ball in his hands,” Craft. “He was a little injured. We hadn’t played on artificial turf before.  We will get used to it and keep working.”

Natchez’s defense gave them life in the second half. They didn’t give up a point and gave the offense plenty of opportunities to tie the game.

They stopped Hazlehurst who was driving the field down to the Bulldog 30 late in the game. It set up the final drive for the Bulldogs.

“At halftime, we started executing what we should have in the first quarter,” Craft said. “We corrected our alignment on certain formations. If we are lined up correctly, it eliminates us from having to make certain plays.”