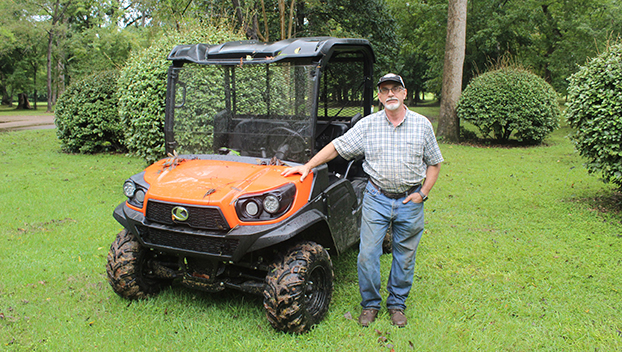 Natchez native Ken Rogers is a “mound preservationist” at Grand Village close to where The Dart landed. He is also a martial arts teacher in Natchez and Brookhaven. He enjoys hunting and fishing with his wife Rita Rogers. (Hunter Cloud | The Natchez Democrat)

NATCHEZ — Ken Rogers pulled up beside a dumpster and began throwing trash into it from the back of a Kubota side-by-side, explaining that it’s just one of the tasks he handles as the groundskeeper, maintenance man and “mound preservationist,” at Grand Village of the Natchez Indians, close to where The Dart landed Wednesday.

A Natchez native, Rogers graduated from Mississippi State University where he earned a degree in horticulture. He spent 10 years as a county agent for Alcorn State University, and his farming background has helped him handle the equipment and tractors needed to maintain the 126 acres of land at the Grand Village site, which is divided by St. Catherine Creek.

But Rogers’ interests stretch beyond horticulture and land management.

“I also teach martial arts in the evenings,” he said. “I have a school here in Natchez and in Brookhaven.”

He is a seventh-degree blackbelt and has taught martial arts in Natchez since 1983. His first school was on Franklin Street. Now, his classes are taught in the Moo Sul Kwan Arts and Fitness gym behind Ernst Pharmacy.

Rogers said he first developed an interest in martial arts as a child. At Mississippi State, he took martial arts classes to get physical education credits. Competing in tournaments got him interested in being better at martial arts, he said. The last competition he took part in was five or six years ago, he said.

“I want to build interest back up here in Natchez and host a tournament,” Rogers said.

He will be eligible for his eighth-degree black belt in 2024.

Rogers pulled out his phone to show pictures of his martial arts memories. One photo showed him flying through the air as a young man. He scrolled through his photos again and came across a silver motorcycle with the appearance of a fighter jet.

“It is an St1300,” Rogers said. “I ride it to Brookhaven on nice days. I’ve ridden it up the Natchez Trace and camped at Meriwether Lewis State Park. It is such a feeling of freedom when you are on a bike.”

Riding dangerously fast is not his thing, he said. His bike could hit 60 miles per hour in three seconds or less. On the Natchez Trace near Kosciusko, Rogers found an open stretch of the road and decided to go wide open with his bike.

Wearing a full motorcycle helmet, a locust or some sort of bug struck his face mask with a “splat,” he said. The experience put him off riding fast as he wondered, “What if that had been a bird,” he said.

His martial arts training also taught him to be alert, a skill he uses on the motorcycle.

“I’ve had numerous close calls but never had a wreck, thank God,” Rogers said. “You have to remember when you are riding that this could be your last (ride) so I have to be careful.”

Rogers has always loved being outdoors. His brother, Fred, helped him become a junior trap shooting champion. Now an outdoorsman, Rogers and his wife, Rita, enjoy hunting and fishing together. His weapon of choice is either a bow and arrow or a .35 Whelen break action rifle, he said.

Driving down the nature trails at Grand Village, he pointed to the horsetail grasses with paths winding through them in the St. Catherine Creek bottom.

“Me and my wife walked through here last week and we jumped so many deer as we walked,” he said.

The nature trail is open to the public but people are advised to stay away from St. Catherine Creek, he said. As if on cue, in a bend in the trail, a young deer jumped up out of cover and across the dirt path, its white tail disappearing into the woods while Rogers talked.

Finishing his “Grand tour,” of the site, Rogers drove back to the mound sites and stopped. Underneath five feet of sediment deposited by flooding sit three additional Natchez mounds, he said. These are in addition to the three mounds visitors can see at the site.

Walking around the museum he soaks up information from the exhibits and asks questions to gain more insight.

“I’m enjoying this job,” Rogers said. “Lance Harris is so understanding and he is a great boss. If I need to teach a class I can come in a little early to get my work done and leave in time for class. We want people to come out here and experience the Grand Village.”