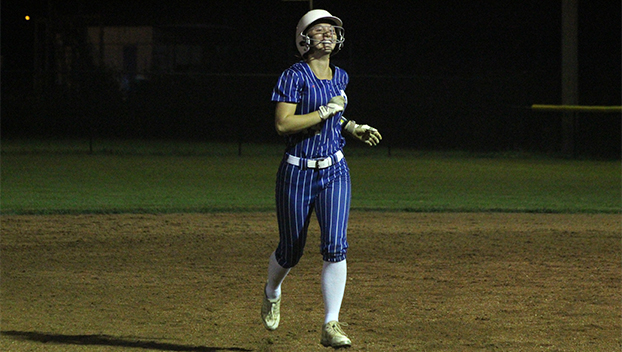 Georgia Martin hit a home run for the Rebels but it was not enough as they fell to St. Joe Madison 3-2. ACCS will have a must win game Tuesday night to make the playoffs. They play St. Aloysius with the first pitch set for 5:30 p.m. ( Hunter Cloud | The Natchez Democrat)

NATCHEZ — Adams County Christian School let a late lead slip away in the final inning to Madison St. Joe and lost 3-2. The Rebels had two hard-hit balls which found their way into the gloves of defenders.

ACCS tied the game in the third as Leila Ray doubled into right field. She reached third on a fielder’s choice. Running home, she was caught in a run down and could not beat the throwback to third base.

Georgia Martin lifted ACCS to a one-run lead with a solo shot to center field in the bottom of the sixth inning. She looked up and saw the ball land on the other side of the fence, and she slowed down to a trot at second base.

“I just wanted to score. I was just looking for a base hit,” Martin said. I thought it was a base hit when I hit it. I didn’t realize it was a home run at first. When I got to second I did. I was really excited. I try to hit base hits only. Everyone had good hits tonight even if the score didn’t go our way”

She trotted to the third and then home with a smile on her face while the umpire told her teammates to stay back. She celebrated with her teammates on the way back into the dugout.

The game was far from over. In the seventh inning, a wild pitch tied the game for St. Joe Madison at 2-2. The Bruins took back the lead with a high chopper back to the mound. They scored the go-ahead run to lead 3-2 in the top of the seventh inning.

The Rebels did not back down in the bottom half of the inning. Senior Brooke Collier squeezed a grounder through the gap between third base and shortstop with one out in the bottom of the seventh inning. A line drive right at the pitcher cut their rally short as St. Joe turned a double play to end the game.

Head coach Tate Lipscomb told his team they have to let the game go mentally and play better on Tuesday night. AC fought hard in the game and will need to fight through emotions on senior night.

“We have to win. As long as we win, we are in. We have the tiebreaker against St. Joe,” Lipscomb said. “The game is to get into the south state tournament. It comes down to one game, and we have to concentrate on one game.”

ACCS will take on St. Aloysius Tuesday night with the first pitch set for 5:30.

5th annual Make a Racket for the Kids tennis…