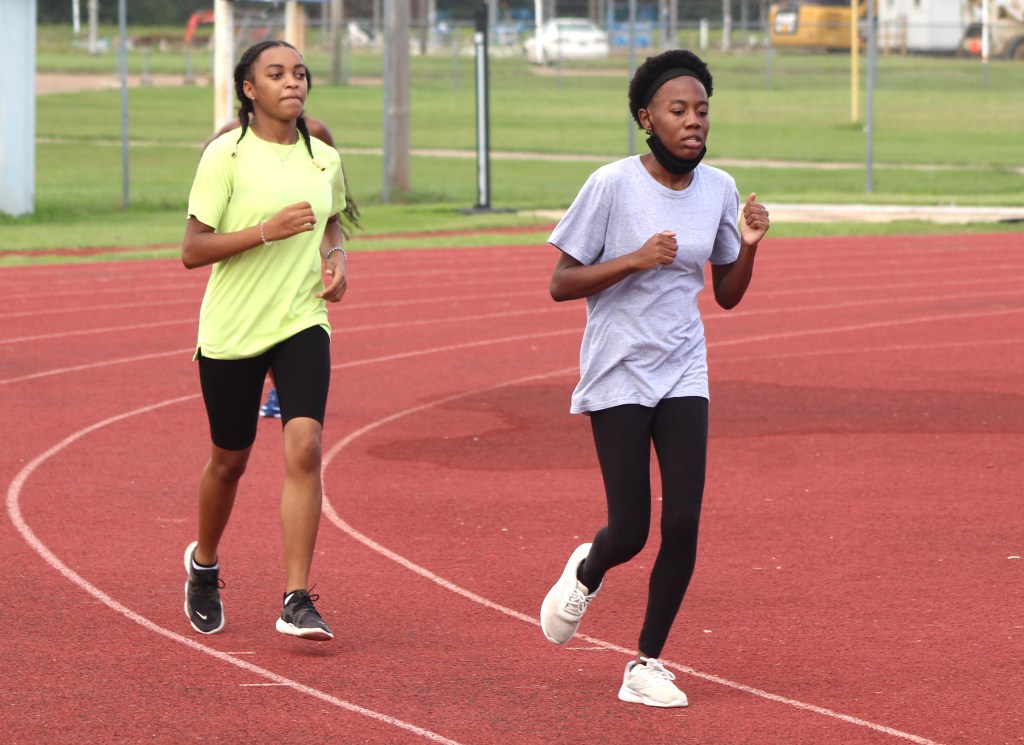 At right, Racheal Wesley finishes a practice at Natchez High. She won the one mile and two mile race at a meet in Vicksburg last week. |File Photo | The Natchez Democrat)

NATCHEZ — Natchez High School Cross Country runners Jadarius Nelson, Kevin Jones, Racheal Wesley and Zanti Isaac are pretty close friends on and off the course. The group of sophomores has grown as runners in the last couple of years, they said.

Nelson and Wesley started running in seventh grade. While running was something Wesley’s family was involved in, Nelson tried running because she asked him to join her. He said he was bad his first year, but she helped him continue running.

“I could see myself improving and head coach Larry Wesley was always yelling at me so I could become better my first year,” Nelson said. “Racheal helped train me by showing me different ways I could run and different aspects about cross country. It helped me, and I still use her advice.”

Her advice was for Nelson to run his race. She said she always wants her team to improve and run a better race. He is in the school’s marching band and splits time between cross country practice and band practice.

His personal record for a 5K is 20 minutes and 59 seconds at Choctaw Trails in the 2019 regional cross country championships. His approach to running his race is to not think about the race.

“I count numbers when I run,” Nelson said. “It keeps me in a place where I know I’m running and competing. In my mind, I’m counting random numbers throughout the race.”

Isaac started running in eighth grade because her brother Brian wanted her to try running, she said. Her personal record for a 5K is a 23 minute and 41 seconds run at Choctaw Trails in 2019. It is the most memorable moment in her career, she said.

“My first meet was the best one,” Isaac said. “I did very well, and it was unexpected. I placed 10th.”

Similar to Isaac, Jones started running cross country in eighth grade. His personal record is a 24 minute and 17 seconds performance at Choctaw Trails in 2019.

He said cross country allows him to release stress, and it keeps him in shape for other sports such as track, tennis and golf. He said having three teammates in the same grade allows them to help each other if they fall behind in their classes. He said he thought cross country would be an exciting experience.

Wesley enjoys running with her teammates. Additionally, she plays soccer, is in the choir, is a member of the comic book club and participates in an esports club. She said they are the team’s veterans because they have stuck with the sport for the longest.