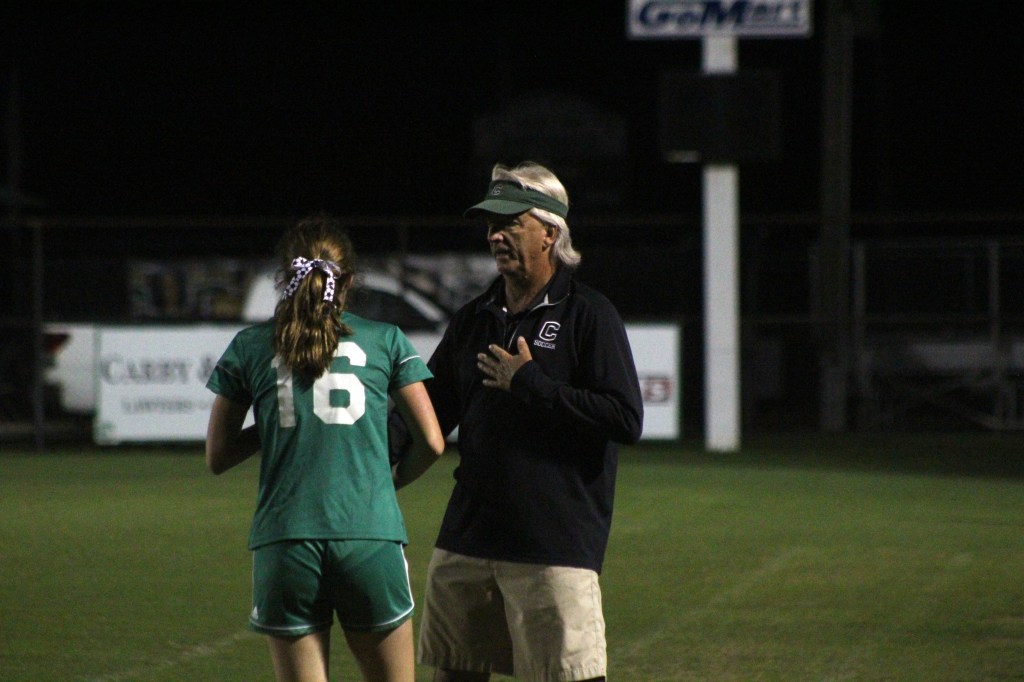 Izzy Dupre walks off the field with about four minutes left in the game. Head Coach Dennis Hogue said she was gasping for air and was feeling the pressure as a senior leader of the team. Cathedral was fighting hard in the second half to get back in the game but couldn’t find the back of the net losing 3-1 to Oak Forest. (Hunter Cloud | The Natchez Democrat)

NATCHEZ — Oak Forest Academy scored two quick goals in the second half and put Cathedral in a hole they could not climb out. Head coach Dennis Hogue said the Green Wave fought to the end, but they fell 3-1 Wednesday night at home.

Oak Forest scored similarly in a game against Cathedral Monday night, which finished Oak Forest 2-0. Those two quick goals changed the body language of the Green Wave team, he said.

“It took the wind out of their sails,” Hogue said. “Everyone started rushing and forcing something that wasn’t there.”

Down by a pair of goals, Cathedral started pushing numbers upfield to try and create scoring opportunities. A few shots flew wide of the goal or over the crossbar in the last 20 minutes of the match.

One shot hit the corner of the goal where the crossbar and post connect and rattled out of play for a goal kick. Maddie Verruchi used her pace on the wings to drive many counter-attacks. Izzy Dupre and Gracie Foster joined the attack but were unable to put a shot past the goalkeeper.

“I was proud of how they battled,” Hogue said. “No one hung their head and jogged it out. Like the Big Lebowski always used to say, ‘sometimes you eat the bear, and sometimes the bear eats you. Tonight, we got eaten.’”

Dupre made surging run after surging run to try and get a goal for Cathedral. Late in the second half, she squeezed a shot off on the goalkeeper, who caught it at the near post. It was the last scoring opportunity Dupre had as she came off the field.
Tears in her eyes, she stood on the sideline with her arms above her head, trying to catch her breath.

“She was gasping for air,” Hogue said. “Izzy is a team leader and a senior who was feeling the pressure of time escaping. The pressure mounted on her, and she tried to put the team on her back. She needed to compose herself for a moment. I hate it got to that point, but I like how she feels the desire to want to do more for her team. It is what makes her special.”

With three matches left, Cathedral needs to win everyone to keep their hopes of making the playoffs alive, he said. On Monday, they play at Adams County Christian School. Tuesday, they host Brookhaven Academy and on Sept. 30 they play Copiah Academy at home.