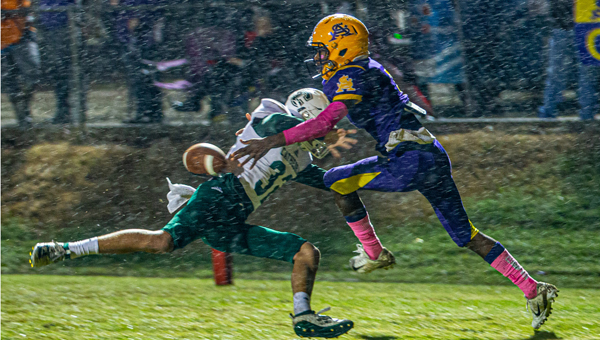 ​​Cathedral's Harper Jones mixes it up with a St. Aloysius receiver on a rainy night in Vicksburg in 2019. The annual matchup between the schools is one of the oldest rivalries in the state. (Bill Barksdale | Special to The Natchez Democrat) (Courtesy Bill Barksdale)

NATCHEZ — Even though Cathedral faces a winless St. Aloysius on Friday, the matchup is still going to be a battle, said head coach Chuck Darbonne.

“They call it the Catholic war. It is one of the longest rivalries in Mississippi,” Darbonne said. “School pride will always be there, even if we aren’t in the same district anymore.”

“They have played well in spurts, a lot of their games have been close loses,” Darbonne said. “They have gotten better each week. We aren’t underestimating them. They have good skill guys and two or three strong  lineman. They just haven’t put it together yet.”

. Cathedral (3-2) has prepared for the game against St. Al with two matchups against downhill and physical teams in Pisgah and Parklane.

The Green Wave also are returning several players from injuries, including Jake Maples and Wyatt Ferret. Having extra depth will help so the Wave don’t have to use as many starters on both sides of the ball.

Offensively, Cathedral is starting to click in practice. Their passing game has steadily improved.

“Harper Jones has stepped up and turned into a threat on offense that people have to account for,” Darbonne said. “We can spread the ball around and get guys like Jake Harrison the ball. He had a touchdown last week. Noah (Russ) does well distributing the ball.”

This distribution of the football has improved the reps at practices. All of the players are running their routes at full speed, Darbonne said.

As a team, their effort in practices this week has been great, he said. To end practices, the Wave have a period for special teams where players run onto the football field and support their kicker. The players have a lot of passion and energy, which they need to transfer to their game Friday, he said.

“”Keeping intensity up the entire game and winning the turnover battle is huge too,” Darbonne said. “We need to come out of the gate and start the game with energy on a high level of efficiency.”

Kickoff is 7 p.m. Friday in Vicksburg.