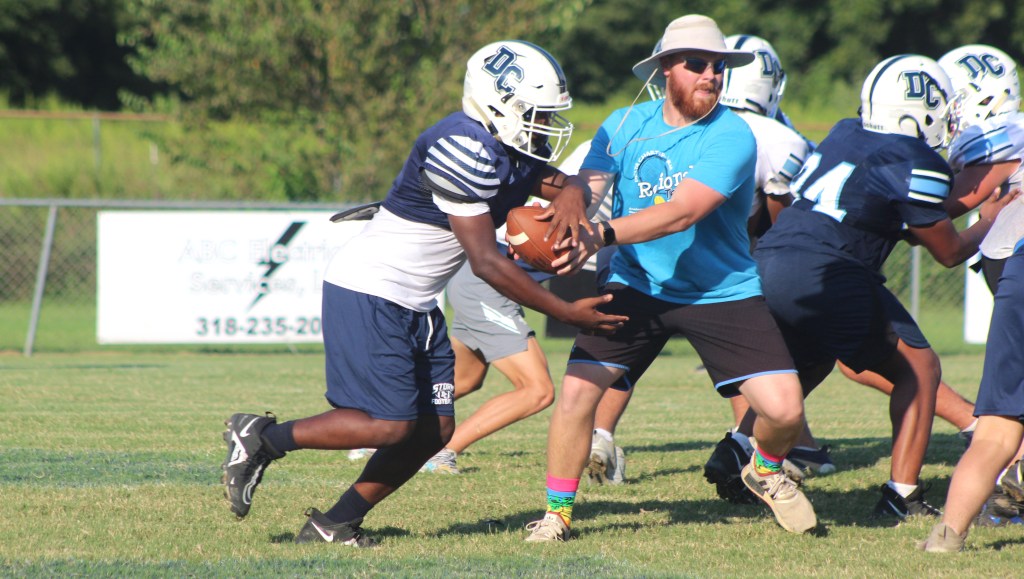 Assistant coach Nic Kennedy, powder blue shirt, helps run the scout offense in the I-Formation as the Storm prepare for a game against Oak Grove. Delta Charter is 3-0 to start the season. (Hunter Cloud | The Natchez Democrat)

The Tigers are 0-3 to start the season but Storm head coach Blake Wheeler said it is because they played tough schools, including programs that have won multiple state championships.

“They are a litmus test. They have been a powerhouse for as long as I can remember,” Wheeler said. “Football is their business. They have played a 3A power, a 2A power and a 1A power, so they will be battle tested. I told our guys today we will have to play a perfect game to beat them.”

Offensively, Oak Grove will attack out of the Power I. Up front, the Tigers have big, corn-fed linemen who will be physical at the point of attack. It will be a test for the Storm defense because they are undersized, he said.

Attacking a big offensive line requires the Storm to shoot gaps and mess with the Tiger’s blocking scheme. Wheeler said when playing a team like Oak Grove requires maximum effort on every snap. o.

“We have given maximum effort, that is one of the things I attribute our record to. Our guys play hard every snap,” Wheeler said. “We have a lot of heart with a lot of young kids. They play hard and it is a good group of kids who have good chemistry. They are the type of guys who will fight to the end. I am expecting us to put forth a great effort.”

Delta Charter’s game kickoff at 7 p.m. Thursday at the Storm’s football stadium. They are playing on a Thursday because of a shortage of referees.