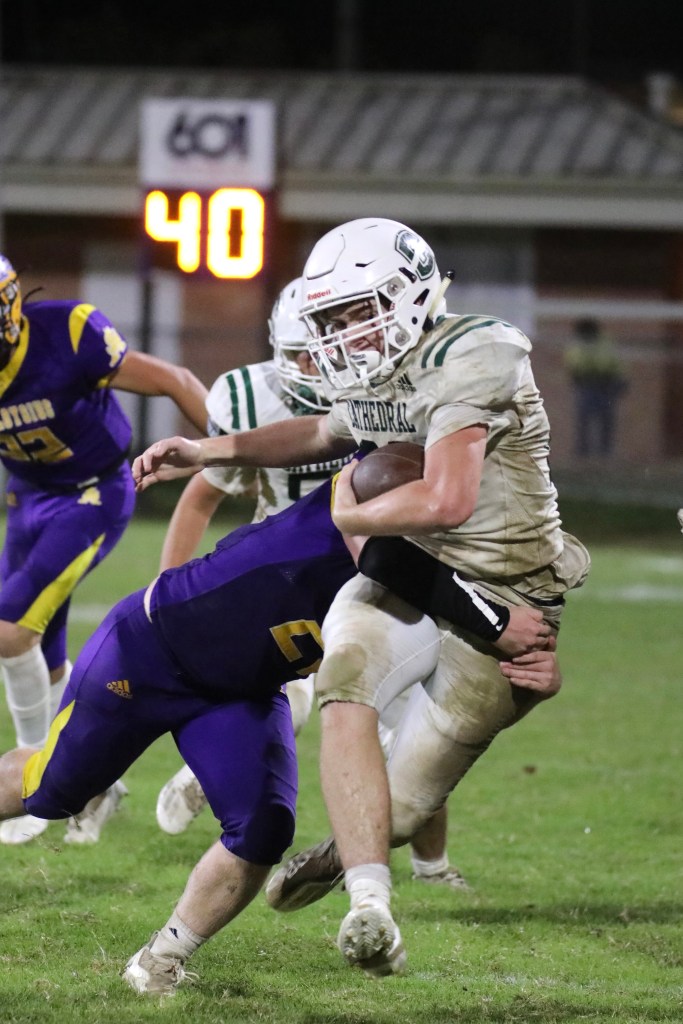 Jake Harriston carries the ball for the Green Wave. He was selected to the MAIS 5A District 3 All-District team along with eight other Green Wave players. (Jody Upton | Green Wave Athletics)

VICKSBURG — In the latest chapter of the rivalry between Cathedral High School and St. Aloysius High School, the Flashes came with a stunning 28-27 win over the Green Wave Friday night to snap Cathedral’s three-game winning streak.

Cathedral appeared to have scored what would have been the go-ahead touchdown on an 80-yard catch-and-run, but it was called back on a controversial offensive pass interference call with less than 1:00 left in the ball game.

The Green Wave was unable to move the ball after that and the Flashes finally picked up their first win of the season after an 0-5 start.

“Lost a close one. We were outplayed and outcoached,” Cathedral head coach Chuck Darbonne said. “We had our chances. We didn’t capitalize when we had our opportunities.”

Darbonne added that St. Aloysius didn’t do anything that they weren’t ready for.

“They did exactly what we were prepared for all week in practice on both sides of the ball. We just couldn’t execute,” Darbonne said.

Christian Wright caught a 10-yard touchdown pass from Noah Russ with 6:19 remaining to make it a 28-27 ball game. On the ensuing extra point, two Cathedral coaches went on the field to try to call a timeout. However, the referee did not see it and the play continued. The extra point ended up being blocked by St. Aloysius and it remained the Flashes kept their one-point lead.

The Flashes attempted a 37-yard field goal with just under 2:00 left that would have given them a four-point lead and force the Green Wave to have to score a touchdown, but Jake Hairston partially blocked it and the kick came up short, giving Cathedral another opportunity to pull out a victory. Unfortunately, it wasn’t meant to be.