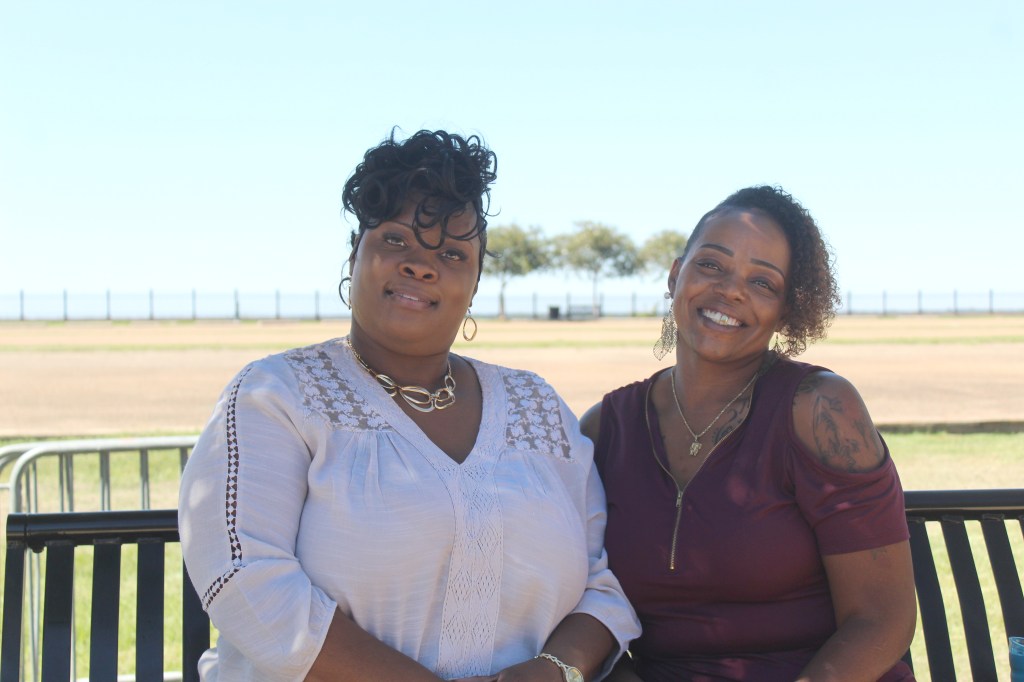 Left, Theresa Stampley sits with her assistant and friend Tomisha Collins on a metal bench on Broadway Street close to where The Dart landed Thursday afternoon. (Hunter Cloud | The Natchez Democrat)

NATCHEZ — Vidalia resident Theresa Stampley sat on a metal bench with her assistant and friend Tomisha Collins in the shade of two trees. Blue, clear skies hung above them on Broadway Street, close to where The Dart landed Thursday afternoon.

A cool breeze rolled over the bluff. It was a perfect place to take a break from an emotional week, she said. Her mother Barbara Hunter Ellis died last week and her funeral was on Saturday.

With her family in town from all over the country for the funeral, she married Greggory Stampley that same evening because she was not sure if they could come back with COVID. Originally, her wedding was supposed to be at the end of the year, she said.

The couple was married from 2004 to 2016 before splitting up for a year. Then they got back together but never officially remarried. In those years from 2017 to 2021, Stampley’s mom still called Greggory her son-in-law.

“It has been a roller coaster. She wanted me to marry him. That was the last thing she told me when she passed,” Stampley said. “We decided to do it right there. People asked me if it was weird at all. It was emotional, but it was what she wanted.”

Originally from New Orleans, Stampley first moved to the Miss-Lou area in 2007. Her grandmother was sick and lived in Tensas Parish, so she moved to help her mom take care of her.

“In New Orleans, we didn’t always have the best environment. A lot of my peers were selling drugs or themselves,” Stampley said. “We got involved in a local church. The counselor there was named Ellisha Mitchell. If it weren’t for her work, I would have done what my peers did. Instead, I counseled people, but I wasn’t getting paid for it.”

Her mom told her she had a gift to be comfortable speaking to people. She graduated from American Intercontinental University with a degree in Criminal Justice. In 2016, she applied for a counseling position and enjoys the work.

Sitting on a bench, she recalls the coping methods she taught her patients. Taking one week, one day, and one moment at a time.

From the age of 5, Stampley cared for her mother.  For the last few years, her mom had dementia and lived in a nursing home.

“Yesterday, I caught myself making food to take her. I just had a moment,” Stampley said. “I know I’m not lost, but there is a gap in my life right now.”