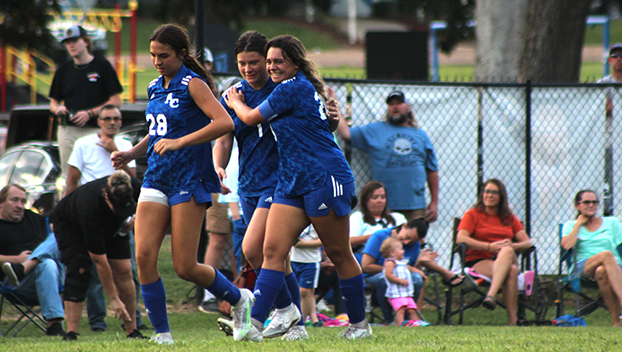 NATCHEZ — Adams County Christian School senior Maddie Campbell scored a hat trick on senior night to lead the Rebels to a 5-4 victory in overtime. It was her first hat trick ever, she said.

Campbell got the Rebels on the board first as she kneed from a rebound off the crossbar home. Her strike gave AC a 1-0 lead.

“As soon as I scored, I had an idea I might score again,“ Campbell said. “I was open on the backside of the goal. It came to me, and it went in.”

In control of the momentum, AC struck again when Maddie Cooley  found space on the edge of the box. She unleashed a shot from distance with her right foot and placed the ball to the keeper’s left for a goal.

Cathedral pegged back a goal as Gracie Foster received a cross at her feet. With no defenders around, she took an extra touch and fired a shot home to cut the lead in half.

Green Wave tied the match with an excellent run by Izzy Dupre in the second half. She took a touch and dribbled around the sliding goalkeeper Sara Gordon to equalize the match.

At the full-time whistle, the game stood at a deadlock of 2-2. In overtime, the Rebels struck first with a goal from Brooklyn Timmons. She headed a cross off the near post and in for a goal.

AC looked like it had a 3-2 lead before the break between overtime periods, but Cathedral answered back. Dupre knotted it back up at 3-3 in the final breath of the first overtime period with a beautiful shot past the keeper.

Campbell scored her second goal on a corner kick played into the box. She was at the back post to tap the ball home to give AC a 4-3 lead.

Late in the second overtime period, she scored on a counter-attack to get her hat trick. Teammates met her with hugs as she wheeled away in celebration. Before this season, the striker played defense but moved to forward.

“It was special. This was my last game on this field. It was the goal that won it,” Campbell said. “It’s been different to get used to playing a new position. I’ve had a good season. I’m happy because we came out with a victory, but it was sad because it was my last game here. It was exciting to win.

Cathedral winger Maddie Verruchi scored a consolation goal in the last seconds of the match, so they lost 5-4. Head coach Dennis Hogue applauded his team’s effort.

“They battled, there ain’t no doubt about that,” Hogue said. “I’m super proud. Everybody had their assignments, and we were doing everything we were hoping to do. We had our chances. We had momentum a couple of times.”