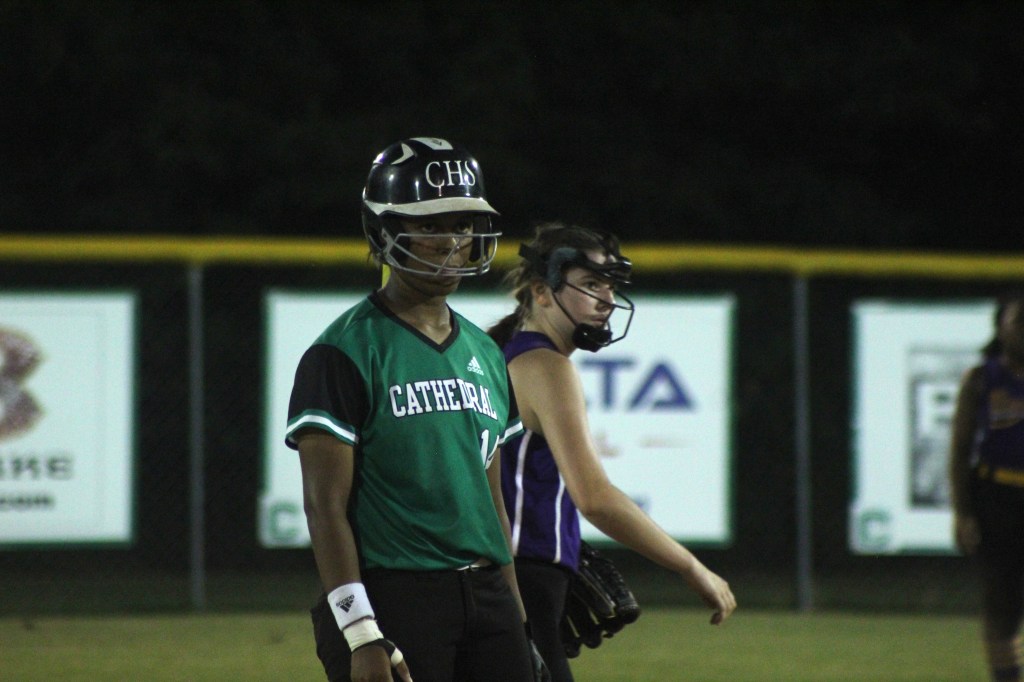 Cathedral senior Lauren Dunbar has had six hits in the South State Tournament so far. The Green Wave are headed to the state tournament. (Hunter Cloud | The Natchez Democrat)

The game went into extra innings thanks to Lauren Dunbar’s single on a 3-2 pitch that brought in a run to tie the score at 6-6. Liza Gregg then singled in the game-winning run in the bottom of the eighth inning to not only keep Cathedral’s season alive, but also allow the Lady Green Wave to advance to the Class 5A State Tournament as one of the final four teams remaining at South State.

Now, it’s a matter of where the District 3-5A champion and No. 1 seed Lady Green Wave will be seeded. They took on Brookhaven Academy Monday at 12 p.m. While the winner of that game would be no lower than the No. 3 seed, the loser would be the No. 4 seed.

As for District 3-5A No. 4 seed ACCS, its opportunity to advance to the state tournament came to an end with the loss to Cathedral. But the Lady Rebels would not go away easy. Trailing 1-0 after one inning of play, they scored four runs off Lily Crum, including RBIs by Camren Strittman and Leila Ray, for a 4-1 lead.

Crum was the winning pitcher as she allowed six runs, only one earned, on five hits with 13 strikeouts and seven walks.

Laiken Davis pitched seven-plus innings and gave up six runs, four of them earned, on 15 hits with three strikeouts and two walks. She helped her cause by going 2-for-4 with one RBI.

Cathedral began its Saturday with a tougher-than-expected 7-4 win over the Columbia Academy Lady Cougars. The Lady Green Wave found themselves down 3-0 after two and a half innings before scoring their first run in the bottom of the third inning.

ACCS fell immediately to the losers’ bracket after dropping a 10-0 decision to the District 4-5A champion and No. 1 seed Brookhaven Academy Lady Cougars in six innings. The Lady Rebels had just two hits — a double by Georgia Martin and a single by Addison Massey.

The Lady Rebels then upset the District 4 No. 3 seed Bowling Green School Lady Buccaneers 7-5. Kate Parsons and Laila Ray led ACCS’s 11-hit attack. Ray had a double and a home run as she went 2-for-4 with two RBIs and two runs scored. Parsons was 3-for-3 with a double, two RBIs and one run scored.

Cathedral dropped to the losers’ bracket after falling to the District 4 No. 2 seed Silliman Institute Lady Wildcats 15-3.

A four-run second inning and a five-run fourth inning propelled Silliman to victory. The Lady Wildcats had 14 hits and were aided by six Cathedral errors.

Cathedral fell 12-1 in a game agaisnt Brookhaven Academy, the loss only effects their seed at the state tournament.