‘What you have here is truly special’: Director looks forward to returning to Natchez 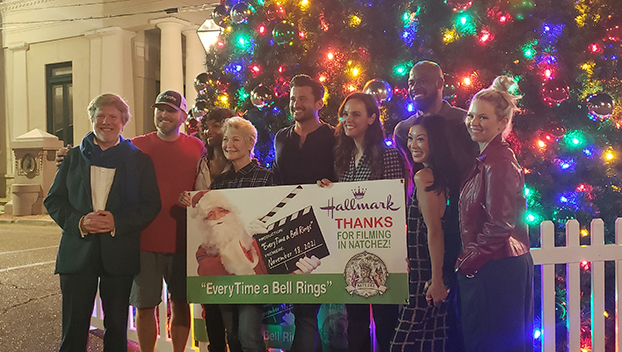 NATCHEZ — “Every Time a Bell Rings” will premier in Natchez on Nov. 14 on the bluff, Evergreen Films’ Daniel Lewis told the 50 or so Natchez residents this morning gathered for the Chamber’s Friday Forum at Natchez Coffee Company.

Lewis and his Evergreen Films recently wrapped up filming the movie for Hallmark. He said the premier here will be a red carpet event and the public will be invited.

“The actors will be here and Hallmark is going to send a couple of folks,” he said. The event will also be utilized as a fundraiser for the Natchez-Adams Humane Society and Christmas in Natchez.

Lewis praised the Natchez community and said he has plans to bring more movies to the city.

“What you guys have here is truly special. This is my favorite place I’ve ever shot a movie,” Lewis said.

Filming “Every Time a Bell Rings” in Natchez happened because of a strange set of events for Lewis, beginning with his diagnosis with thyroid cancer.

“In 2019, I started my own company,” he said. “I had two contracts for movies for Hallmark. The movie I filmed here was set to be filmed in Ponchatoula, and then I was diagnosed with thyroid cancer.”

Then, COVID came along, Lewis said.

“I was told to go home and isolate from everyone, even my family. I spend six weeks in a bedroom. My wife would put food outside the door,” he said. “It was a very challenging couple of years.”

“I came to Natchez and within a couple of days I told myself, this place is built to make Hallmark movies,” he said. “I went home and spent about three months re-writing the script for Natchez.”

Lewis said his company plans to partner with Norris and Tate Taylor and Crooked Letter Picture Co. and will work on a number of joint projects in Natchez, including training students who want to work in the film industry and educating businesses on how to be vendors when film projects come to town.

He plans to make other movies in Natchez, including a horror movie for AMC, which will feature Jeffrey Dean Morgan of “The Walking Dead.”