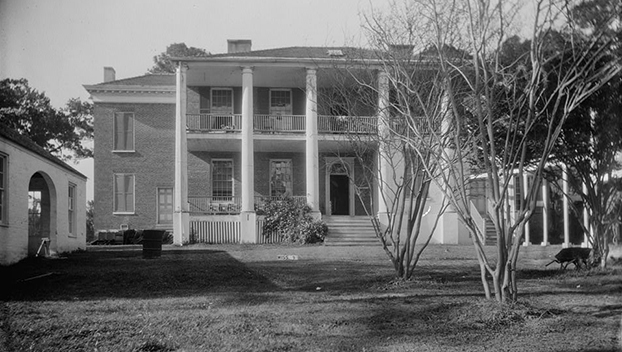 Auburn from 1936. This picture is from the Historic American Buildings Survey.

NATCHEZ — The Natchez Chapter Junior Auxiliary is donating the canteen building to the City of Natchez and — after years of declining membership — the organization is dissolving the Natchez chapter, members said.

Natchez Mayor Dan Gibson said the city intends to use the newer addition to the canteen as the new office for parks and recreation.

The side of the building nearest to Auburn was historically a dairy house and part of Auburn, Historic Natchez Foundation Executive Director Carter Burns said. Dairy houses were used to keep food items like milk and cheese cool using watering troughs filled with cold water, he said.

Gibson said the city is working closely with the foundation to apply for a Community Heritage Preservation Grant to restore the building and the old billiard hall and pavilion adjacent to it.

“We believe it will add to the experience of touring Auburn,” Gibson said. “We are very excited about it and thankful to the Junior Auxiliary for taking such good care of it. … It’s perfect timing because we (the city) now have a full-time director of parks and recreation for the first time since 2008.”

Sanora Cole, has just started in her new position as parks and recreation director, Gibson said, adding the city also has plans to hire an assistant and two full-time maintenance workers to work in her department.

The canteen will continue to be used as a polling place during elections, he said.

Currently, Cannon said the Junior Auxiliary is made up of Morgan Groover as the president, Sarah Allen as vice president and herself as the treasurer.

“We are supposed to have a minimum of 15 members and a max of 50 and we’re down to three,” she said. “It has been that way now for four years.”

Cannon said the discontinuation of the Junior Auxiliary chapter would allow the remaining members to continue to do charitable functions, such as the Angel Tree — their largest holiday charity event of the year — and other service projects with more flexibility.

“We are well-known for a lot of service projects that we do with the schools, the library and in the community,” Cannon said. “For example, we do breakfast with the Grinch and I have been the Grinch. We do other characters for functions throughout the community and in the school system and we don’t want to stop doing that. We’re going to branch out on our own and just won’t be under the JA umbrella, which is a national organization.”

Cannon said to qualify for Junior Auxiliary membership, volunteers have to commit to a minimum of five years of community service and fundraising with the organization.

“That’s a lot of years to say ‘yes’ to. It’s hard,” she said. “I’ve been with it seven years and have never seen our membership be over 20. Over seven years I’ve watched it do nothing but decline. We have quite a few lifetime members because JA has been around since the 50s.

“After doing away with the Natchez Chapter, we are not going to have to adhere to their guidelines. … This isn’t a bad thing. Our younger generation is willing to say I can’t give you five years but I can give you a few hours.”

The Natchez Chapter of the Junior Auxiliary was founded by 12 women who would pick up young children and bring them to the canteen and teach them in a type of day school which focused on academics as well as life skills. The ladies were already doing this independently in the mid to late 1940s and joined the national organization of the Junior Auxiliary in 1950.

Over the years, it grew and became a social organization more than a civic one, Cannon said.

The Junior Auxiliary Canteen at one time was “the place” that teens went to have fun, social events, she said.

“Through different generations, it was always that but for different functions. Through the 70s it was teen dances and then in the first part of the 80s they used it for art exhibits and contests, field days, spring fling — it was used for so many different things.”

Gibson said, “We hope that some of that building could be made available to the public for their use again.”

After the dissolving of the Natchez Chapter, Cannon said she expects the charity to return to its original purpose, as a group of people doing good for the community.

“I don’t want to let go of the Angel Tree because we have a huge need for it in our community. We give to children who probably wouldn’t have a Christmas otherwise,” she said. “We had children asking for coats and shoes for Christmas presents. People think that doesn’t happen in Natchez, but it does. The (Angel Tree) has gotten support from places I never thought possible. When people see someone doing something like that, they’re eager to help.”