Perfecting the art of preservation 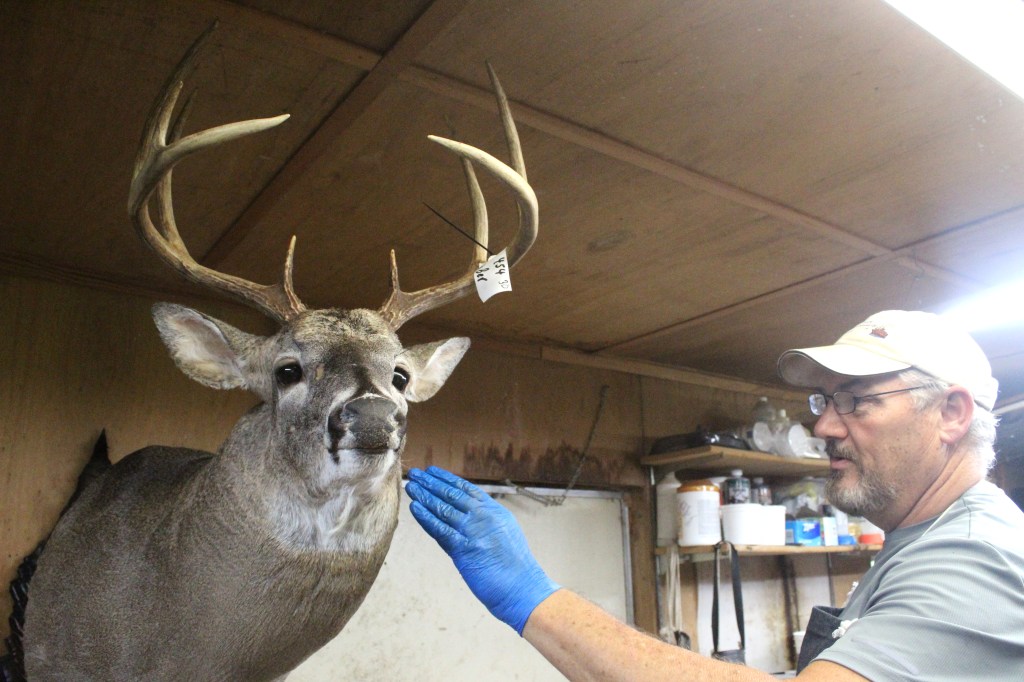 Natchez taxidermist Tucker Crisp paints around the eyes and nose of a deer head mount he is working on. His experience as an avid hunter gives him knowledge in presenting wildlife as it would be seen in their natural habitat. (Hunter Cloud | The Natchez Democrat)

NATCHEZ — Tucker Crisp got his start in taxidermy because he was too tight with his money to get his deer mounted, so he tried it himself. The first project took three remounts, he said.

“I had no idea I would do it for a living,” Crisp said.

While working at the paper mill, his co-workers started asking him to mount their deer. Word spread the mill was shutting down, so he told his wife Donna Crisp he was going to start a taxidermy business.

“She said, ‘you can’t make a living doing that,’ but she let me try,” Crisp said. “That was 17 years ago. I have been bowed up ever since and couldn’t think about doing anything else.”

In those 17 years, Crisp has taxidermied everything from squirrels, ducks, fish, deer, hogs, alligators, turkeys and an El Chupacabra. He said the El Chupacabra was a coyote who had the mange. People have asked him to taxidermy pets, but it’s not something he is interested in.

He said the carnivorous animals such as bobcats or foxes can be challenging because if a hunter doesn’t get them straight in the freezer or on ice their hair will fall out. The same goes for coyotes, and their intestines start to stink even if the hide is good, he said. His number one goal while taxiderming is to present an animal as it would in the wild.

“A lot of people call me an artist, but I’m by no means an artist. I can’t even draw,” Crisp said. “I have been in the woods long enough to where I can get my mounts anatomically correct. To get a turkey to look right is the hardest.”

Hunters or fishermen can do a few things to help taxidermists before they bring an animal to be mounted. He said to ensure a quality mount, people should start with the preservation of their harvest.

Back in the day, people thought the best way to preserve a fish you wanted to mount was to roll it up in a towel, he said. Instead, fishermen who want to freeze their fish should put their catch in a garbage bag and then squeeze all of the air out of the bag. This keeps the fins from drying out, he said.

“Once those fins dry out, they get in a bad shape and you can’t do a mount,” Crisp said. “If you can’t get it into a freezer for a few days, you can put them in an ice chest. You have to keep them on ice. Those scales will fall off once it gets to a rot stage and you can’t get a quality mount.”

Fishermen do not need to clean the fish. The same goes for other small game such as ducks or squirrels, he said.

With bow season opening Oct. 1, hunters have a challenge keeping their deer heads preserved in the warm weather. He said the best thing hunters can do is get their deer processed and put in the cooler as quickly as possible.

One mistake people make is putting their deer head in the fridge, he said. It is just above freezing and after a week or so, the head will start to rot on people. If you are at a hunting club, placing a plastic bag over the head to keep the eyes and nose from drying out is a good idea, he said.

“The best thing a hunter can do is to drop the head down in a big garbage bag, like the thick leaf bags, you can get the antlers in it too,” Crisp said. “This keeps the hide and ears away from the freezer air, which preserves them.”

Deer head mounts are his favorite taxidermy to work on because he knows the timeline, he said. Taxidermy is a tedious job, especially when it comes to doing skull mounts.

Hunters who want a skull mount should cut the head off right behind the skull where it connects to the spinal cord. He said people do not need to bring the whole neck and to have the best munt they should not cut into the skull.

“Everyone needs to do one skull mount to see what kind of work you have to do,” Crisp said. “I have a tool I use to get the brains out, I have bugs I use too. You have to degrease the skull afterwards or else yellow spots will appear on it.”

Those bugs are called dermestid beetles and they can clean a skull in 12 to 24 hours. He said keeping the beetles alive is a challenge in the gap between hunting seasons.

Soon, business will begin to pick up with a peak in activity from Thanksgiving to New Years. He said, “From Christmas to the end of the year it is wide open (full throttle).”