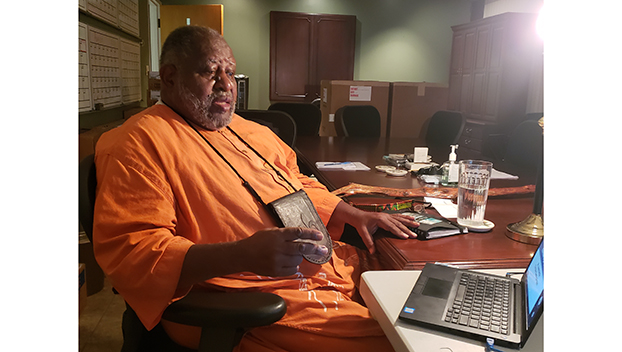 Ser Seshs Ab Heter-CM Boxley watches from the Natchez National Historical Park Conference Room as the International Underground Railroad Month Closing Ceremony is broadcast on Wednesday. Boxley makes his acceptance speech after he is named the recipient of the Wilbur Siebert Award.

NATCHEZ — Natchez native Ser Seshs Ab Heter-CM Boxley sat in the conference room of the Natchez National Historical Park Wednesday evening with a smile on his face broadcast to the world during a virtual ceremony with international stakeholders in the National Underground Railroad Network to Freedom program.

The program was established to honor, preserve, and promote the history of resistance to enslavement. The Network currently represents over 695 locations in 39 states, plus Washington D.C. and the U.S. Virgin Islands.

As the program hosted its International Underground Railroad Month Closing Ceremony on Wednesday, Boxley was one of four award recipients.

He received the Wilbur Siebert Award, recognizing him for “exemplary Underground Railroad research” and “outstanding contributions to the field,” according to a news release from the National Park Service.

“(Boxley) has worked tirelessly to preserve the Forks of the Road, one of the largest slave markets in the U.S.,” the release states. “His desire is to honor the memories of those Africans who contributed to Natchez’s history. Boxley’s efforts paid off when Forks of the Road was recently added to Natchez National Historical Park.”

Boxley said the journey to Forks of the Road being named an Underground Railroad Network to Freedom site began approximately 18 years ago.

Through his tireless effort to garner the attention Forks of the Road deserves as one of the largest slave markets in the nation, Boxley said he discovered an ad that would become a key to its designation as Network to Freedom site. The ad said Joseph Biggs, a known Slave dealer from St. Louis, “looking for his slave … who ran away from Forks of the Road,” Boxley said.

“Finding that ad was what I used … to nominate the street juncture at Forks of the Road as an Underground Railroad Network to Freedom site,” he said.

Boxley added at the time he could only nominate the street because the remainder of the site was private property. Boxley’s efforts paid off in June, when the City of Natchez finalized the transfer of land parcels at Forks of the Road to the National Park Service.

Now, “the application can be amended and the whole ground can be included,” he said.

Other honorees at Wednesday’s closing ceremony were Joseph McGill, Roane Smothers and the winner of the Network to Freedom photo contest, Shawn Halifax.

Joseph McGill, founder of “The Slave Dwelling Project,” visited Natchez in April to host a virtual panel discussion from the slave cabin at Melrose.

McGill has reached close to 150 sites in over 25 states and the District of Columbia at historic locations by conducting programs, lectures and spending nights in the dwellings.