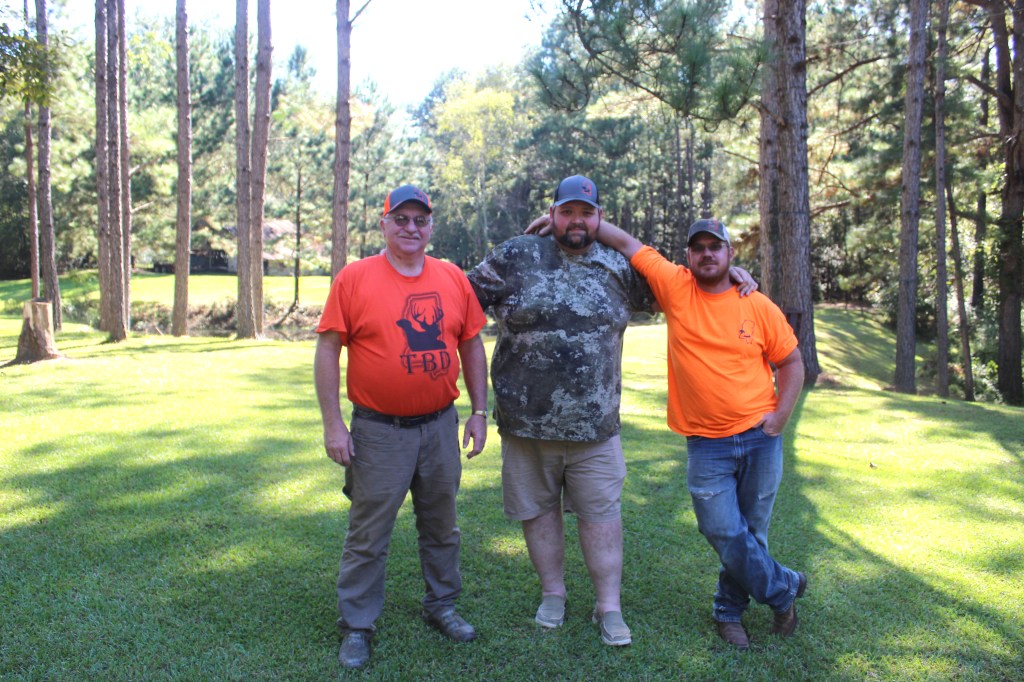 DeerTracking6.jpg These are some of the founding members of Team BrakeDown. From left, Thomas Arnold, Jeffery Nunnery and Justin Williams. Team BrakeDown is a deer recovery tracking group with members across south Mississippi and parts of Louisiana. (Hunter Cloud | The Natchez Democrat)

CROSBY — Deer hunting requires investments of time, energy and money by the hunters. It is because of this investment that hunters want to recover any game they have shot while hunting.

Team BrakeDown offers both the manpower and man’s best friend to aid in the recovery of deer which were mortally wounded. The deer tracker group can also give confirmation to a deer hunter if they missed a deer, group member Thomas Arnold said.

“There is help out there if a hunter makes a bad shot,” Arnold said. “Help is there. If you are willing to let us come and look. We do not charge anything.”

He is one of six original group members along with Jeffery Nunnery, JD Thomas, Justin and Rudy Everett, Bo Bryant and Justin Williams. They started the group six years ago.

At first they covered an area from Natchez to Tylertown, but have grown to cover an area from Columbia to Catahoula Parish, as far north as Crystal Springs and as far south as West Feliciana Parish.

Members are one phone call away, while many have jobs, they can get hunters in touch with a member in the group to recover an animal. Smithdale resident Nunnery said he likes to do a little interview before he gets into the woods.

“I ask what they shot with, which direction the deer went, what time did they shoot and what was the size of it,” Nunnery said. “Every piece of information would help you. The more information you can get before you get in the woods the better. We want to help people.”

The recovery of deer would not be possible without the furry, tail wagging and barking companions of group members. Nunnery trains his dogs while they are young by taking a liver and cutting them into little cubes. He sets up a training track and over time it gets more and more challenging. Liver is also a treat and keeps the dogs engaged because their attention span is short.

As dogs get older, he creates a conditioning track using a hoof off of a deer. He will create a shot site with hair and drag the hoof to create a trail for the dog to track. When a deer is shot, it releases a scent through its hoofs which helps the dog track.

“Many times there are multiple deer in an area,” Nunnery said. “They can not spread the smell of the interdigital gland. I want them to key in on that.”

Building trust and bonding with a dog is another crucial part of training tracking dogs. While certain dogs may be more equipped to track deer, any dog is capable of doing the job, Arnold said.

He has a long haired dachshund, named Joey, that will track a deer as he sniffed out a trail around his property and to a tree behind a pond where a hoof dangled from a branch. Joey started chewing on the hoof while his tail wagged, Arnold smiled with pride.

When a hunter takes a shot and believes they hit a deer, they must make a mental note of something in the background. This is helpful in the late evening as the light changes from twilight to darkness and scenery changes drastically.

Hunters can also use a 100 yards rule when tracking a deer they shot, Nunnery said. If they are unable to find a deer within 100 yards, or if anything changes in the trail they should back out, flag the last spot and call.

“If you shoot a deer and you have any doubt go ahead and call us,” Nunnery said. “If you second guess, then call us.If you are going to track a deer, take maybe three people. Try your best to not straddle the blood trai, you can spread the blood trail too, which makes tracking harder.”

Additionally, if a deer may have crossed property lines it is best to go ahead and get permission to enter that land before you call Team BrakeDown, he said.

Tracking wounded deer is an adventure all in itself. Smithdale resident Justin Williams said every track is different.

“The ideal track is one that is straight and in the clear,” Williams said. “They aren’t all like that. Most of them are not like that.”